This short extract is from the final chapter of The Landscape of Utopia, which is published by Routledge in February 2022. 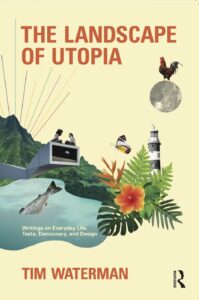 The food philosopher Carolyn Korsmeyer speaks of taste as good judgment, however it must be assumed that if taste as a sensation can be unpleasant, then taste as a judgment can also be perceived as negative as well as positive. In other words, ‘bad’ taste is still taste. But here is Korsmeyer: “Taste is construed as the ability to perceive beautiful qualities and to discriminate fine differences among the objects of perception, differences that might escape notice by someone without Taste” (1999: 42). She goes on, though, later in the book, to admit a different standard (and compare the ‘taste of necessity’ to the idea of hunger as dearth, which I have critiqued above):

Bourdieu characterizes the eating habits of the leisured bourgeoisie as ‘the taste of liberty or luxury’ and those of the working class as the ‘’taste of necessity.’ […] Bourdieu emphatically rejects the qualitative distinction between literal and aesthetic Taste. There is no universality of Taste untainted by class privilege, no pure judgment of aesthetic pleasure. And therefore there is no need to stipulate a particular sort of Taste to ground universal aesthetic standards. Both kinds of taste are part and parcel of the same social forces (1999:65).

Similarly the notion of ‘good’ or ‘correct’ judgment appears in the architectures. Nathaniel Coleman describes how taste is conceived in the work of theorist-architect Claude Perrault (1613-1688). Perrault “argued that taste, which lends itself to cultivation because it is an agreed upon social construction, is the only sure way to protect architecture from fancy.” ‘Fancy’, here, being a form of pure, uncontextual or even anti-contextual invention which has much more recently become many architects’ calling card —exemplified in postmodernism by Charles Jencks’s ‘iconic building’ (2005). “A crucial facet of Perrault’s construct—what separates it from later developments—was his conviction that, because of its venerability, a classical language or architecture would persist indefinitely as the vehicle by which buildings would continue to communicate” (Coleman, 2005: 13).

The fixity of this notion of taste is anchored by chauvinism. It assumes that only one model of Taste: likely an upper-class European frame, is possible. It is useful for the reason of avoiding such totalizing models of ‘good taste’ to speak of tastes as particular to different circumstances, different cultures, and different classes. “Ethics and aesthetics reduced to rules are useless: ethical action is always singular and circumstantial,” writes Alberto Péréz-Gómez (2006: 4). It is likewise useful to speak about ‘architectures’ instead of Architecture or knowledges instead of Knowledge. Architectures appropriate to tastes and situated knowledges might vary widely, and draw on the resources of many and variegated utopias. Hannah Arendt explains the importance of this relationality succinctly, and when she speaks of ‘a culture’, she is pluralising rather than seeing culture as unified and bounded:

[T]aste and its ever-alert judgment of things of the world sets its own limits to an indiscriminate, immoderate love of the merely beautiful; into the realm of fabrication and of quality it introduces the personal factor, that is, gives it a humanistic meaning. Taste debarbarizes the world of the beautiful by not being overwhelmed by it; it takes care of the beautiful in its own ‘personal’ way and thus produces a ‘culture’ (1977 [1954]: 224).

Whether our tastes are highbrow or lowbrow, we still describe our sensual world in taste terms, and our lifeworlds are expressed in particular urban idioms, local and regional expressions of landscape, and are shared through foods and languages that express the local and regional. Even in a globalized world, the local is always particular. This is so because patterns of custom are played out as slowly shifting rituals that repeatedly inscribe, reinforce, and resonate with patterns of local urbanism in a dialogic way. It is important to see the customary as that which is practiced, as this deeply affects the way landscapes and landscape relations are imagined. A few years ago I visited the Expo in Milan as a journalist (Waterman, 2015). It was focused on the theme ‘Feeding the Planet: Energy for Life’ and amongst all the national pavilions was an installation celebrating the Slow Food movement. I had a conversation with an earnest young activist who spoke about the need to ‘preserve’ their home city of Genoa’s food culture and protect it from outside influences. In the course of the conversation I pointed out, gently, that Genoa’s food culture was explicitly the result of its cosmopolitan and outward-facing history as a port city, and that maintaining an openness to influence was the best way to value and extend a robust culinary heritage.

To see such heritage as performed, enacted, and practiced in customs rather than as a given or a tradition is the key to avoiding the fixity of chauvinism. Despite the increasing tendency for people to be described as ‘consumers,’ a term which seems oddly drained of savour, the reality is that most people are actually ‘customers’ when they are in public. They act out roles and rituals repetitively, bringing repeat business to the places that enrich their everyday experience. Those urban attractors that inspire custom are each utopian fragments—dream ideals that have been realized, or at least partially realized. They can be recruited into the imagination, using “the privileges of fiction” (Shonfield, 2000: 154) to understand how they figure in people’s narratives about the spaces they inhabit. These fragments of utopia help to fix the urban fabric in place and to provide loci for community and collectivity. It’s the partiality of these last schemes which I find interesting, but also perhaps the utopian fragments of totalitarian regimes bear some examination as well, or perhaps the fragments of the free market capitalist utopia, which, while it has conspired with state u/dystopian forms to build such horrors as the military- and prison-industrial complexes, has also contributed much fantasy architecture from Art Deco department store palaces such as Barker’s or Drage’s (sadly, recently demolished— sucked into a beige hole) in London or pleasure gardens like Melbourne’s Luna Park. Even dystopian fragments have importance and even allure as ruins or memorials, from the carefully maintained landscape, buildings, and artefacts at Auschwitz or Vienna’s indestructible Nazi flak towers to thanatourism sites like the Atomic Research Facility at Orford Ness in Essex or Pripyat in the Chernobyl Exclusion Zone. This perhaps offers an insight into how particular buildings or sites can provide object lessons for humanity about how it ought, or ought not, to act.