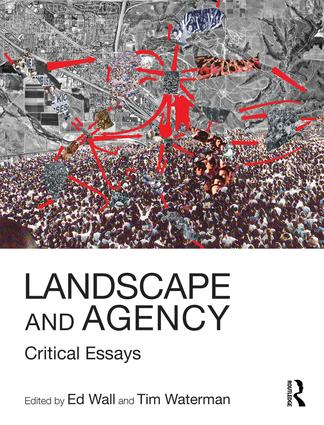 Landscape and Agency: Critical Essays is forthcoming from Routledge in October 2017

This is an excerpt from my chapter in Landscape and Agency: Critical Essays, due out this October, which I co-edited with Ed Wall. My writing is in superb company in our book: Ross Exo Adams, Camillo Boano, Paul Cureton, Jill Desimini, Murray Fraser, Maria Guidici, William Hunter, Jane Hutton, Katya Larina, Don Mitchell, Peg Rawes, Douglas Spencer, Amy Strecker, and Jane Wolff. More information about the book is available here.

The misunderstanding or misapplication of public manners – the set of customs that eases people’s negotiation of public spaces – creates problems for the design of public landscapes such as streets and squares. In Britain in particular, much pressure has been brought to bear on design for the public landscape to provide visual cues for behaviour, usually with very mixed results and a preponderance of signage. Despite the British reputation for politeness, the relative absence of customs for appropriate public behaviour creates problems not just for design but for the comfort and safety of individuals, and also for civility, recognition, and democracy in society as a whole.  I don’t wish to imply that public manners have necessarily been eroded over time – in many places the public landscape is a more civil place than ever before in history – however it is important to address what should or could be in order to provide most fully for democracy and human flourishing.

The first value of the public landscape is that it should be equally accessible to all, regardless of any individual’s membership in any minority group and regardless of any person’s class. Equality does not automatically confer justice, but in this case the link is fairly clear, as I shall discuss below. This particular equality is primarily guaranteed by manners rather than legal enforcement. Manners, the expression of virtues, are the first and most basic expression of morals as applied in everyday life – and indeed form the ground from which many moral judgements are constructed. Peter Johnson concurs, noting that “without civility as a minimal condition of human contact … principles of justice and welfare would have little permanence and reliability” (1999, xi), and John F. Kasson in his study of American manners writes that manners “are inextricably tied to larger political, social, and cultural contexts and … their ramifications extend deep into human relations and the individual personality” (1990, 3). The construction of public manners is also highly relational, contingent upon place, time, and what actors are engaged in a situation. The word ‘situation’, in and of itself, is telling, and points to the fact that our moral lives are always situated. Here it is important to stress that this is not a position of moral relativism; in fact it is quite the opposite, as what is sought is a condition of public interaction that assumes certain universal moral goods, such as the avoidance of harm and/or pain, and the aspiration to human flourishing.

Democratic public life depends upon a customary compact between citizens; an agreement as to what is proper in a public context. The notion of propriety has long been associated with sanctimoniousness, of ‘polite society’. When manners are constructed of hierarchical relationships, they inevitably involve deference and condescension as well as inflexible and possibly harmful codes of honour. When manners are seen as the foundation of just relations in civil society, then ‘polite society’ might be seen as simply the mutual regard necessary to ensure the movements necessary to society, a structure in which we are all inevitably embroiled. Put simply, propriety is a form of ownership; individual ownership of the self and its relation to the public world at large. Propriety is defined by custom, and custom, at its best, is not a dogmatic and inflexible framework, but rather it informs and is formed by everyday life and everyday practices. Further, what is proper to society is the mutual recognition in the public realm that is the first gesture of reciprocity – a sort of gift from one person to the next, however small. The anthropologist Stephen Gudeman is one of our finest commentators on this. He writes, “Strictly a secondary and composite phenomenon, reciprocity is not the core of society but its expression. Anthropological theories have it backwards: reciprocity is neither a primitive isolate nor the atom of society but its badge” (2001, 92). Reciprocity also takes us outside of our communities, into realms of exchange outside of the exclusive bounds of community. Gudeman, to some extent, indicts the construction of communities: “A commons is regulated through moral obligations that have the backing of powerful sanctions. But communities are hardly homes of equality and altruism, and they provide ample space for the assertion of power and exploitation from patriarchy to feudal servitude” (2001, 27). Much political rhetoric has stressed the importance of community, but civil society is a broader realm than mere community and requires broader consideration. What happens on a sidewalk reflects our understandings of public engagement beyond the bounds of community.

Johnson, Peter (1999) The Philosophy of Manners: A Study of the ‘Little Virtues’. Bristol: Thoemmes Press.