The superlatives of contemporary expression reach as far as possible to the extremes of human experience. The sheer awesomeness (or awfulness) of everyday life leads us to select descriptors such as ‘epic’ or ‘iconic’ for every object or environment or atmosphere we encounter. An offhand internet search for ‘iconic pencil sharpener’ and ‘iconic toilet’ yields pages of results. If everything is to storm us with shock and awe then either we will begin to live in a state of permanent exceptional transcendence or we will merely cease to give a damn. I submit that the latter is far more likely, and that the sublime has been rendered banal.

There are, of course, biblical injunctions against such fevered hyperstimulation and hubris, as evidenced by the myth of the Tower of Babel. In this story of pride’s punishment, the tower’s erection and subsequent collapse is the classic parable of the consequences of overreaching. Pieter Bruegel the Elder’s two surviving paintings of the tower from the mid-1500s show it as an inexorably ascending spiral, its mountainous bulk contrasted against a typically low and waterlogged Flemish landscape. The cities Bruegel would have known would have been dominated by Brabantine Gothic piles such as those found on the Grand Place in Brussels, thus it was probably politically apt for him to represent Babel in the Romanesque style, taking a lesson from the past rather than rendering arrogance as a particular problem of his contemporaries. 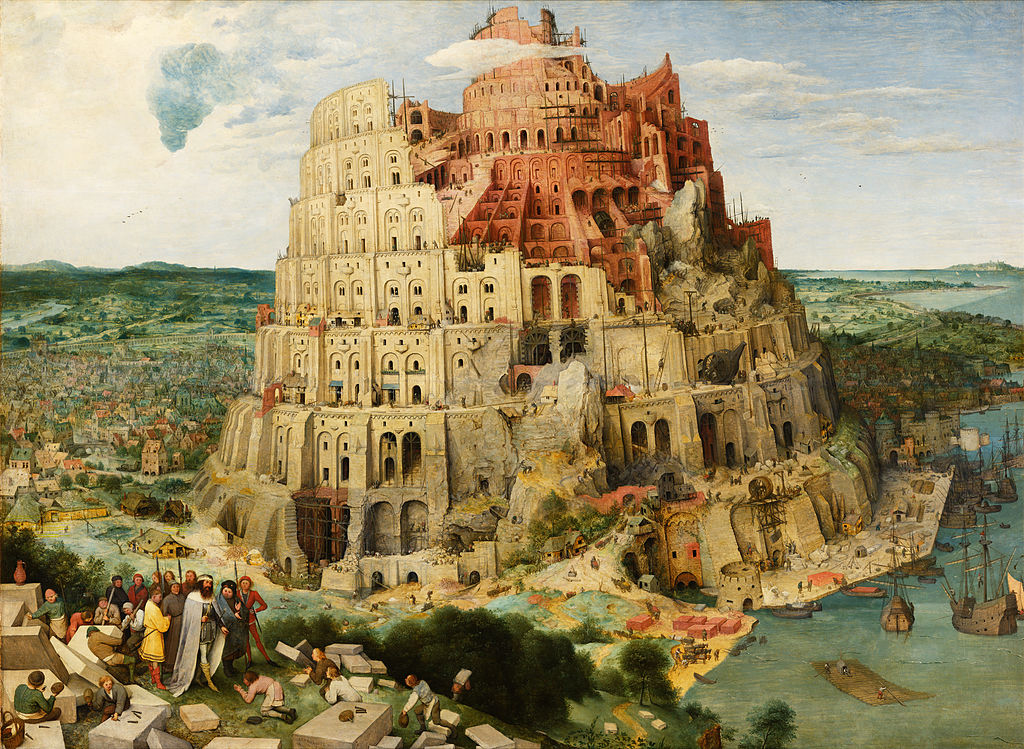 Bruegel’s versions of the Tower of Babel are sometimes described as referencing Rome’s Colosseum, but this is a simplistic comparison. Of course this comparison may be made, but its real representational strength is that it is a monstrous hybrid. It is part grim fortress, part cathedral, part theatre, but it is also a mountain, freakishly misplaced, and an obsessive piling of rocks into an expression of the urban sublime. The mountain is a sort of madness of the genius loci, or perhaps a cancer.

Bruegel’s magic mountain is a mythical one, but there are plenty of extant examples of buildings that have radically reconfigured landscapes throughout history. Various groupings of pyramids  echo montane forms, such as those at Giza in Egypt, Teotihuacan or Palenque in Mexico. Later structures such as Borobudur or Angkor Wat accomplish much the same trick. The Bayon at Angkor Wat, its spiritual omphalos, represents the multi-peaked holy mountain upon which the gods dwell and which forms the axis of the universe. The function of any of these buildings was surely to induce awe. 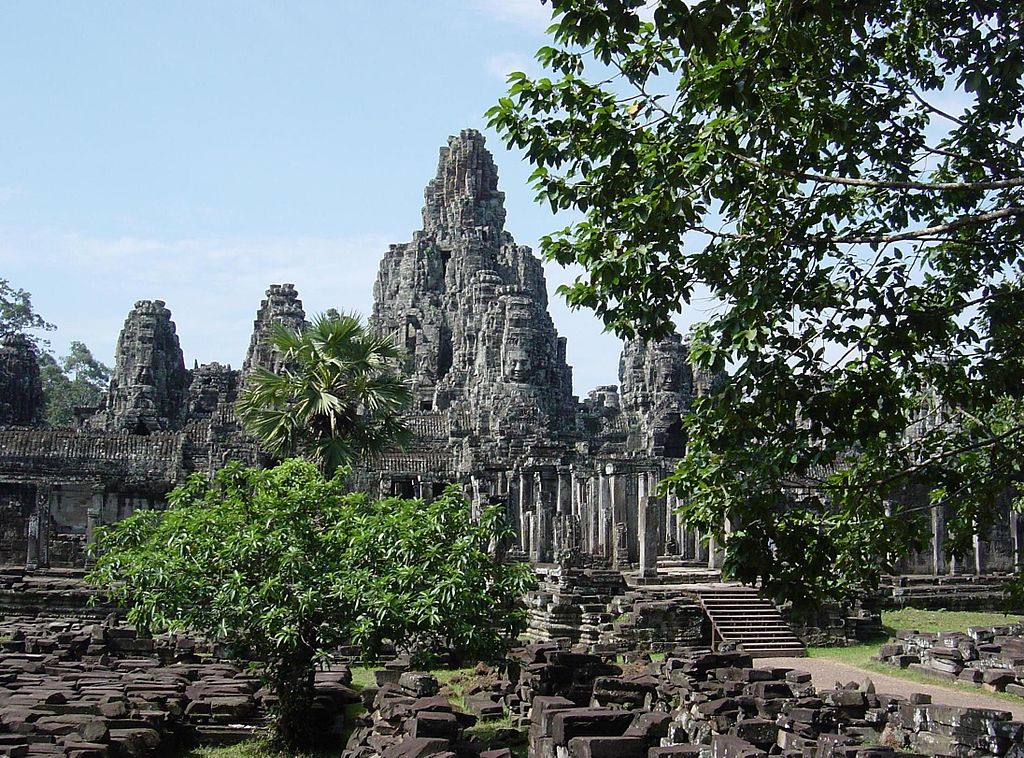 There are, of course, real mountains that are sites of sublimity and that glow with spiritual significance such as Mount Kailash in Tibet, Mount Fuji in Japan, Kenya’s Mount Kilimanjaro, or Australia’s Uluru. There is definitely a certain something to the combination of singularity, difficulty of access, and the many metaphors triggered by the act of ascent.

A combination of technologies including the elevator and the curtain wall have allowed cities to create skylines that recall mountain ranges, and certain buildings can serve as key ceremonial peaks within those ranges. In film, the Tower of Babel is the name of the building that serves as the focus for Fritz Lang’s Metropolis, and that other great twentieth century dystopian film Blade Runner consciously quotes some of the scenes of the Tower, aligning film history and myth along the axis of the western cultural universe. Manhattan’s Pan Am Building, though less graceful than Lang’s visions, also fixes an urban streetscape through sheer force of height and bulk. The World Trade Center towers did the same for the whole of Manhattan’s skyline until they volcanically expressed the sublimity of terror in September 2001.

The World Trade Center site, with its enceinture of faceted curtain walls around the twin pits of the National September 11 Memorial strikingly resembles the caldera of a shield volcano such as that of Ball’s Pyramid in the Pacific Ocean to the east of Australia. So, eerily, do other major towers of our day such as the Burj Khalifa in Dubai, the Ryu-Gyong hotel in Pyongyang, or London’s Shard. The church steeple pitches of their facades emphasise their improbable eruption from the surrounding city. 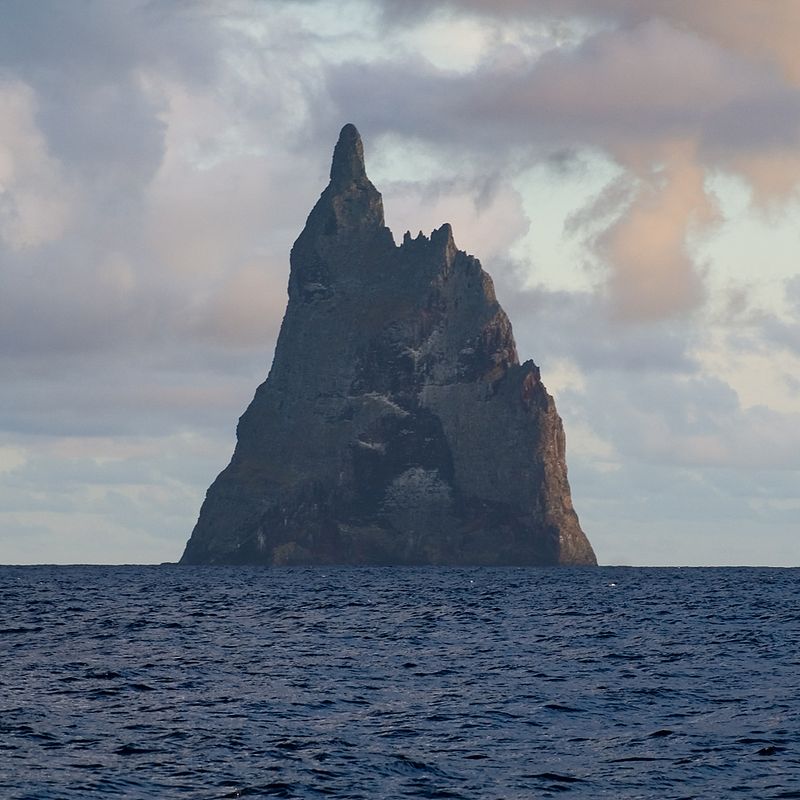 In the past few years there has been a curious rash of magic mountains proposed for various European cities that merge techniques of building and landscape architecture and which also mash together images of the urban sublime with that of the wilderness. Given the increasing propensity of contemporary governments to throw money at big signature projects instead of management or multitudes of small, meaningful projects, it may simply be a matter of time before someone builds one. The three proposed mountains are (in chronological order) as follows:

The Berg, Tempelhof, Berlin, was proposed by architect Jakob Tigges. Ringed with mist and Nazi architecture, it would rise to a 1000 metre height so that aerial perspectives of Berlin usually only attainable through aviation could be gained. The blog Pruned wrote in 2009, “The proposal is not a serious idea, admits Tigges; rather, it’s a provocation to use the site for something other than mediocre apartment buildings.” http://pruned.blogspot.co.uk/2009/01/mountain-tempelhof.html 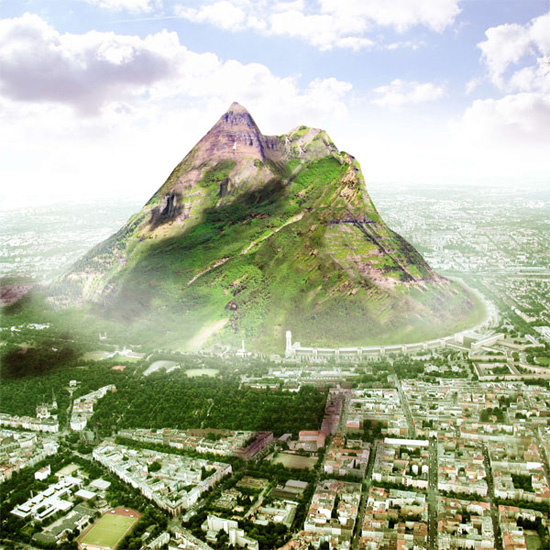 Die Berg Komt Er (The Mountain Comes), the Netherlands: 7.7 billion cubic metres of sand would be required to build this mountain to a height of two kilometres, presumably to park an ark should a flood necessitate it. Feasibility studies have shown that the mountain would probably have to be constructed as a hollow building because of the extensive impact of its weight upon surrounding ground levels. The proposal was mooted in 2011 by Thijs Zonneveld, a journalist and cyclist, and the architecture firm Hoffers & Kruger has created renderings.  http://diebergkomter.nl

Mount Copenhagen, Denmark. Writers Mik Thobo-Carlsen and Kaspar Colling Nielsen first dreamed up the idea 12 years ago, but first aired the idea around the same time that the Dutch mountain was first proposed. The Mount Copenhagen website states that it will be “…3.5 kilometers high. It will have a circumference of 55 km, take 200 years to build, and cost in the area of $120.000.000.000,-“ http://mountcopenhagen.com

The last, Mount Copenhagen, might take generations of work to complete, as did so many of the monuments of the landscape sublime mentioned so far in this article. If any of these were to be built, would they become the sacred ruins of the future? Would they be icons of wilderness or of architecture? Are these proposals delightfully ridiculous or merely banal?