This article is from the April 2014 issue of Landscape Architecture Magazine (LAM) and I have re-blogged it from The Dirt. 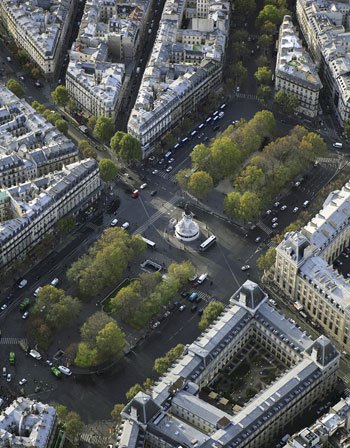 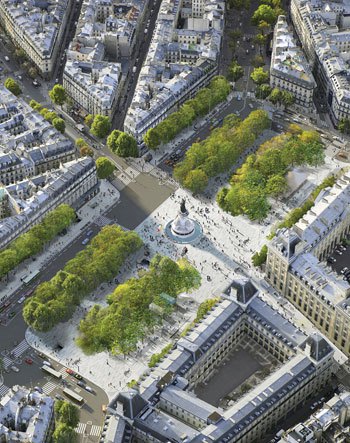 A piece of Paris has been recivilized for walking (or skating, or scootering, or protesting). Taxi Drivers aren’t happy, but they’ll get over it.

Over lunch at the cheap and cheerful Gai Moulin restaurant near the Pompidou in Paris, I spoke with the man at the next table about his experience of the Place de la République. He replied that it was outside his usual haunts, but that he had always seen the space as “a sort of absence.” This is precisely how I remembered the Place from previous trips to Paris. It was somehow dark, cold, and wet in every season; a vortex of angry traffic that made fugitives of pedestrians, a margin, a nonplace. What a pleasure, then, to return to find a space filled with warmth and activity even on a damp winter day.

The design, by the French architecture and urbanism practice Trévelo and Viger-Kohler (TVK) with Martha Schwartz Partners and the landscape architects AREAL, has brought the city back together where it had been fractured by traffic planners and years of small streetscape adjustments unaided by strategy. TVK was responsible for much of the design, the meetings, the consultations. One of the great successes of the space is owing to creative input from Martha Schwartz Partners: the partial pedestrianization of one side of the square. The other is owing to a very sophisticated grading strategy.

The Place de la République sits at the corner of the 3rd, 10th, and 11th arrondissements and at the center of a spiderweb of streets with no fewer than seven roads connecting (and more diving into forks just before). There are also five Métro lines that converge underground and eject people at five points around and within it. The square’s current shape is the result of the talented megalomaniac Georges-Eugène Haussmann’s interventions in the Second Empire. The construction of the square and the adjoining boulevards involved the destruction of a row of theaters on the Boulevard du Temple. One of the earliest known photographic images, a daguerreotype of the Boulevard du Temple, shows the area before Haussmann’s picks began to swing.

The center of the Place de la République is the top of a gentle hill on which sits a gaudy statue of Marianne, France’s national emblem, brandishing an olive branch with bombast. Before the renovations of the square she sat marooned on a traffic island, her pedestal covered with graffiti deposited during demonstrations. Now she floats over the dome of space, and the topography bends away from her and down the many radiating streets. The hilltop has been gently smoothed in every direction, which gives it a decisive tautness. It doesn’t have “hospital corners,” tucked into itself nicely as so many squares do; rather the tautness extends beyond the square and down each connecting street. As Schwartz says, “The project’s big win was to attach the square to the rest of the city.” The decisive, perhaps brutal, confidence of Haussmann’s avenues has met its complement. The square and the surrounding streets have all been joined in grand unity. 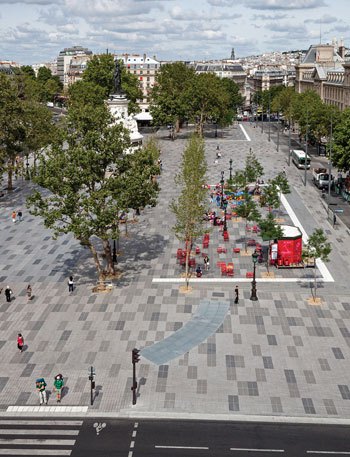 The redirection of the traffic, which partially pedestrianizes the northeastern side of the square, is almost a photocopy of London’s Trafalgar Square, which was also a choked gyre of traffic until Peter Heath, at Atkins, and Norman Foster, at Foster + Partners, corrected it in 2003. Whereas Trafalgar Square is completely pedestrianized along one side, its Parisian counterpart allows bus and taxi traffic along its quiet side. It’s hated by taxi drivers, who claim that there is now a permanent bottleneck at the Place de la République. The London version is not loved by taxi drivers either, nor by the National Gallery, which, with characteristic English reserve, claims the space is now so overrun with tourists that it has turned into an undignified carnival. In 2009 the gallery actually tried to have the traffic returned to the square.

The city of Paris is willing to wait out the taxi drivers, though. The intentions are overall to make Paris a place much friendlier to alternative transportation modes, and the hope is that congestion will ease as car usage declines. Paris also gives over automotive spaces to the pedestrians, bikes, and other wheels along the Seine during the summer when a beach appears on the road, and on Sundays all year.

On my midwinter visit the tourist throngs that plague Trafalgar Square weren’t in evidence at République, but the square was certainly thronged on my arrival. Thousands of Kurds and their supporters had turned out to protest the murder of three Kurdish activists in Paris the previous year. Flags of a variety of countries waved from the hands of young protesters who were climbing Marianne’s pedestal. Food vendors set up at the edges of the crowd, and then, lining every street in incredible numbers, there were armored gendarmes with their vehicles, drinking coffee and waiting for trouble (which never came). From my hotel room just next door we could hear the indignation of the crowds and the speakers coming in waves.

At midnight the square was full of piles of refuse being gathered together and trucks with pressure washers. A couple of flags still fluttered around the statue. The next morning, a Sunday, was clear and bright, and early on in the day the traffic around the square was light. With a cup of coffee and a croissant I watched the Place de la République awaken. First there were just a few of us—a couple of homeless people on a bench, the other coffee drinkers, a few people whizzing by on bicycles. Gradually, though, a wide variety of other types of wheeled vehicles began to appear, attracted by the large, clear, smooth space. First a father teaching his tiny son to ride his bike, then a mother and a young girl both with pink Rollerblades, and a toddler on a scooter who let it fall to the ground in order to have a good full-throated cry. Later, two girls with unicycles carefully threaded their way through a group having a kickabout with a soccer ball.

While I watched all the activity dependent upon a clear, level space, a delightful paradox became evident. The space does, as I’ve mentioned, slope off into streetscapes in every direction. It’s far from level. However, along the pedestrianized edge of the square, a series of four flights of stairs provides balconies over the space below and helps to give the illusion of levelness. Thus it is possible to stand in the square and simultaneously comprehend it as both meticulously level and pronouncedly domed. What’s even better is that this isn’t an accident. It required some very canny and careful grading. Not one of the flights of stairs meets the slope in the same way, and there are cross slopes to the cross slopes.

There’s a particular irony that Martha Schwartz Partners should have helped to design a space where the design work flies so low under the radar. Her practice is founded on her flair as a provocateur. She has always wished to move the landscape profession by exciting comment and provoking debate, and always with highly visible design overtures. “I am the army ant that sacrifices its body to build a bridge,” she says. She utterly rejects the old dogma within landscape architecture that it is at its best when it is invisible. I couldn’t help asking whether such a minimalist space was enough for her. No, of course not. If she had her way she would have swept the old plane trees away that guard one side of the space, replacing them with a series of big fountains. But it was not to be.

She explains the Place de la République’s subtlety in terms of the fabric of Paris itself. Paris doesn’t need landscape spaces that shock it back into functionality. It’s already working in so many ways, and so sure of itself. Paris, she says, “doesn’t need a defibrillator.” Still, one gets the sense she would have used one anyway if she could have. Maybe it doesn’t need it, but it can certainly take it.

There are also difficulties trying to make a design splash in a public space where so many people have ownership. “The public landscape is the most contested of all spaces,” Schwartz says. “It is where everything overlaps. It’s more political territory than it is environmental or social, for example.” In addition to the many stakeholders, how much can happen in a project depends upon the political will of the powers that be—whether they will take on risks, which may depend upon where they are in the electoral cycle. “TVK took the largest part of the project—they were sitting there with the politicians.”

It is the big moves that work here, and perhaps also all that work with the politicians. Other gestures are much less assured. The square’s simple austerity allows the warmth of human activity to fill the space. TVK seems to have become frightened of such minimalism and added to the square a small wooden stage at the southeast corner, but it looks paltry and tentative. Worse, the square is dotted with wooden benches, the outsized timbers of which seek to reference overstuffed sofas. These appear jokey and compensatory. Finally, the northwestern end of the square is held in place with a small rectangular café, grandly named the Monde and Médias Pavilion. Its glazed walls allow a seamless interaction with the surrounding space, and a roof cantilevers out over seating next to a water feature—perfect for parents wishing to watch their children. There is gently glowing lighting that adds a delicate ambience. From the water side, this is a successful ensemble, but viewed from the street side the café’s lines are far less confident. The floating effect of the cantilever doesn’t elevate the building here—it is decidedly grounded. The heavy beam that forms the cornice and counterbalances the cantilever overpowers the building with top-heaviness, and as an otherwise unadorned box the architecture offers no other tactic with which to counteract this effect. Viewed from the major approach down the Boulevard Saint-Martin across the busy street, it is a graceless and unwelcoming presence.

I leave Paris in the midafternoon and walk to the Gare du Nord to catch the Eurostar back to London. The southern expanse of the Place de la République is now filled with youths skateboarding, and the clatter of boards is so constant it sounds like the pop and crackle of a poorly tuned radio. To all the other wheels in the square I add the two of my suitcase. TVK created a beautiful bande dessinée graphic to convey the various programs and activities that were to be contained within the new Place de la République, and they’re all in there—the kids, the Kurds, the skateboards. Even the sullen taxi drivers might reluctantly find themselves in the mix.

So many of the groups that have ownership of the square have been there through the weekend. The grout is already coming away between the stones from all the pressure washing at night—a direct result of so much activity. It’s gone from being an urban margin to something that integrates the city around it, making it legible. The charming little cafés near the Square du Temple are now part of the same city that contains the tranquil Canal Saint-Martin, which, just on the other side of the Place de la République, dives into a tunnel through the same hill that is crowned by Marianne. What the graphic fails to show is that the site’s narratives aren’t contained here. They are now part of all of Paris’s trajectories again—they stretch outside, they connect, and they bring the whole place into focus again.

NB – I just visited Paris again recently with my partner in the aftermath of the Charlie Hebdo attacks. The Place de la République was clearly a focal point for public sentiment. 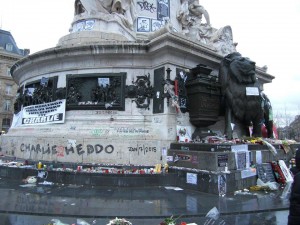 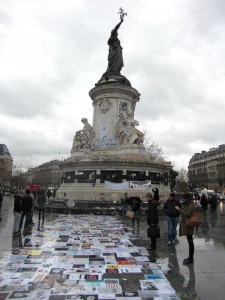