Two remarkable buildings (at least) are scheduled for demolition in Fitzrovia and Soho, my neighbourhood. Their loss marks a failure to value the city as a collective work evolving over time and a failure to see buildings as part of urban social, cultural, aesthetic and even ecological context. London’s landscape will be further impoverished as a result.

The first of these buildings is Richard Seifert’s Copyright House on Berners Street, just next to the pseudomodern atrocity that is Fitzroy Place, and the second is the art deco Drages Department Store at 68-89 Oxford Street, a bookend to the celebrated Ideal House on Great Marlborough Street. Though not as cleanly detailed and crisp as Ideal House, Drages epitomises the exuberant spirit of interwar commercial flash with its sculptural decoration in pink on gray. Drages is to be replaced by another leaden hunk of corporate architecture by Lifschutz Davidson Sandilands, wicked perpetrators of the execrable Fitzroy Place.

Last year I was interviewed in the Fitzrovia News about Copyright House, and I said the following:

“Fitzrovia is distinguished by a mix of buildings that have come to be cherished primarily because of their contribution to the lively but consistent scale and texture of its streets. Buildings of many eras, often designed with the élan and exuberance suited to a central location, provide both a record of each era’s aspirational aesthetics and a comforting assurance of continuity. Fitzrovia is one of the finest examples available that the city is a collective work of human endeavour over time,”

“Richard Seifert’s Copyright House, businesslike and muscular but with a touch of whimsy in its undulating canopy, is an important part of this cumulative work. Both its interiors and its exterior should be restored and maintained in this spirit. In particular its adjacency to the similarly important Sanderson building and other fine examples of contextual modernism in the area militate for its preservation as part of a local ensemble of twentieth century architecture.

It’s for too long been a lazy habit to see modernist architecture as buildings arrived from outer space on vast, cleared sites. This is perhaps more true of twenty-first century buildings than it ever was in the last century, particularly if one is looking about globally. Here are just a few of my very favourite examples of fine, contextual twentieth century architecture in my neighbourhood, taken from a quick virtual stroll around: 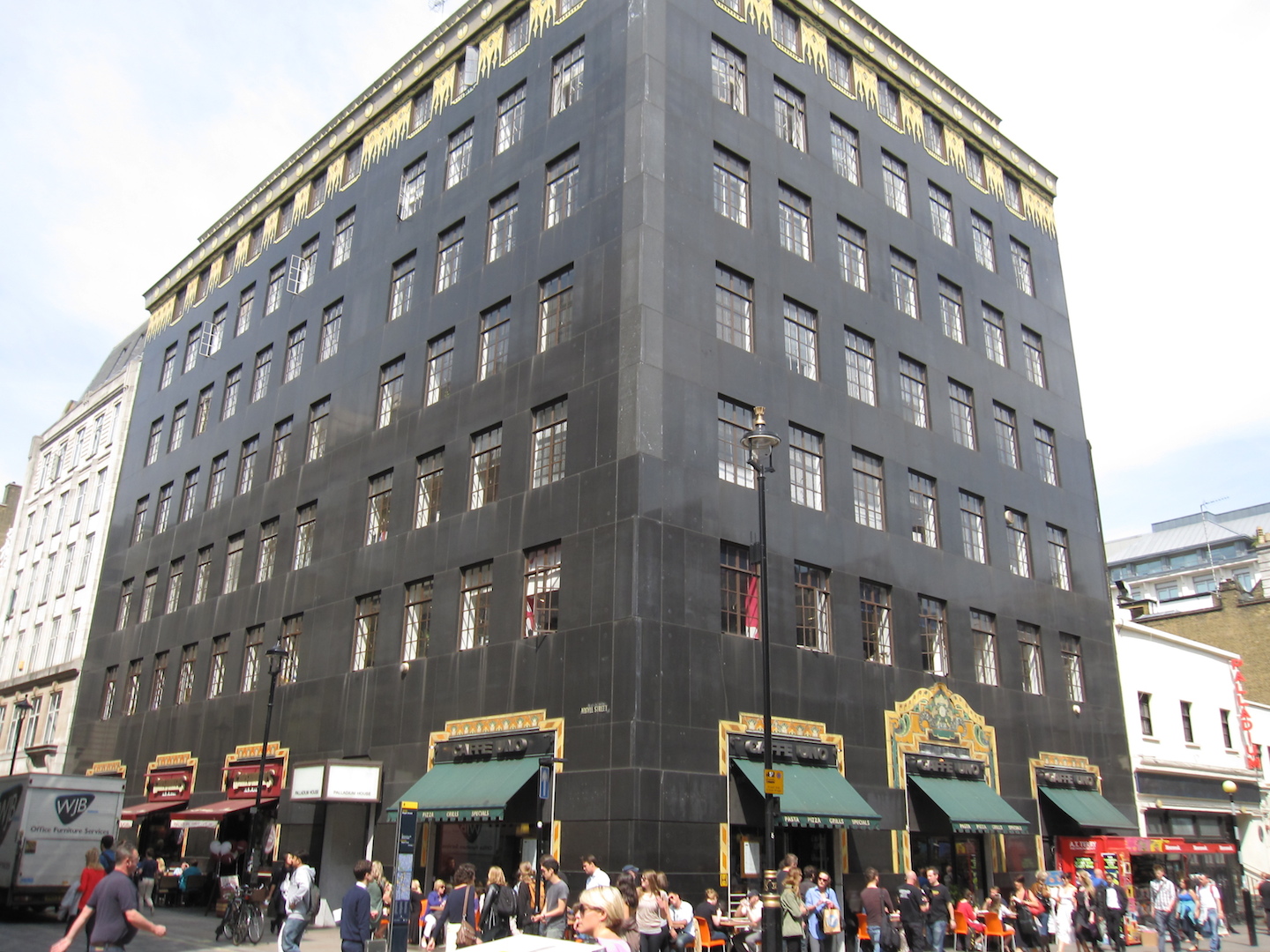 The Ideal House is located on Great Marlborough Street/Argyll Street, London, W1F 7TA. It was constructed in 1928-1929 by the architects Raymond Hood and Gordon Jeeves in the art deco style as the London headquarters of the American National Radiator Company. Image by Gryffindor, Wikimedia Commons

The incredibly confident and magnificent Ideal House on Great Marlborough Street and, below, its nearby art deco compatriot, the former Drages Department Store on Oxford Street. It’s so clearly both of and for its place; brash and beautiful, unabashedly capitalist bombast. Here is the Twentieth Century Society’s lament to its passing. 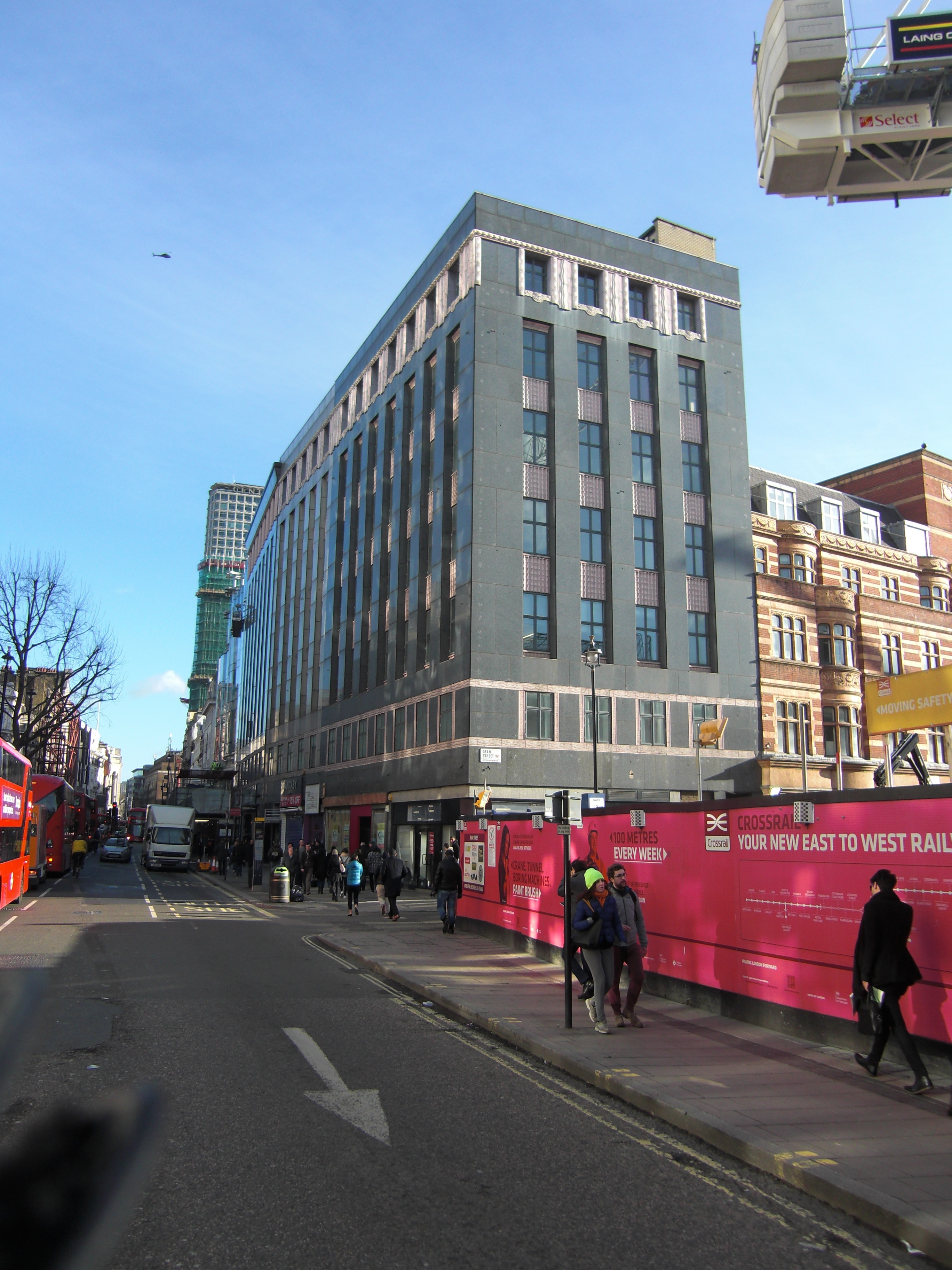 Incidentally, it is this bit of placeless, hamhanded blang (that’s bland + bling) by Lifschutz Davidson Sandilands that will replace it. Look how it squooges out over the buildings to its rear like a roll of sweaty, overheated real estate fat. And I’m sure it’s meant to meet the sky in homage to Seifert’s Centre Point, seen behind, but it comes off as parody more than homage. 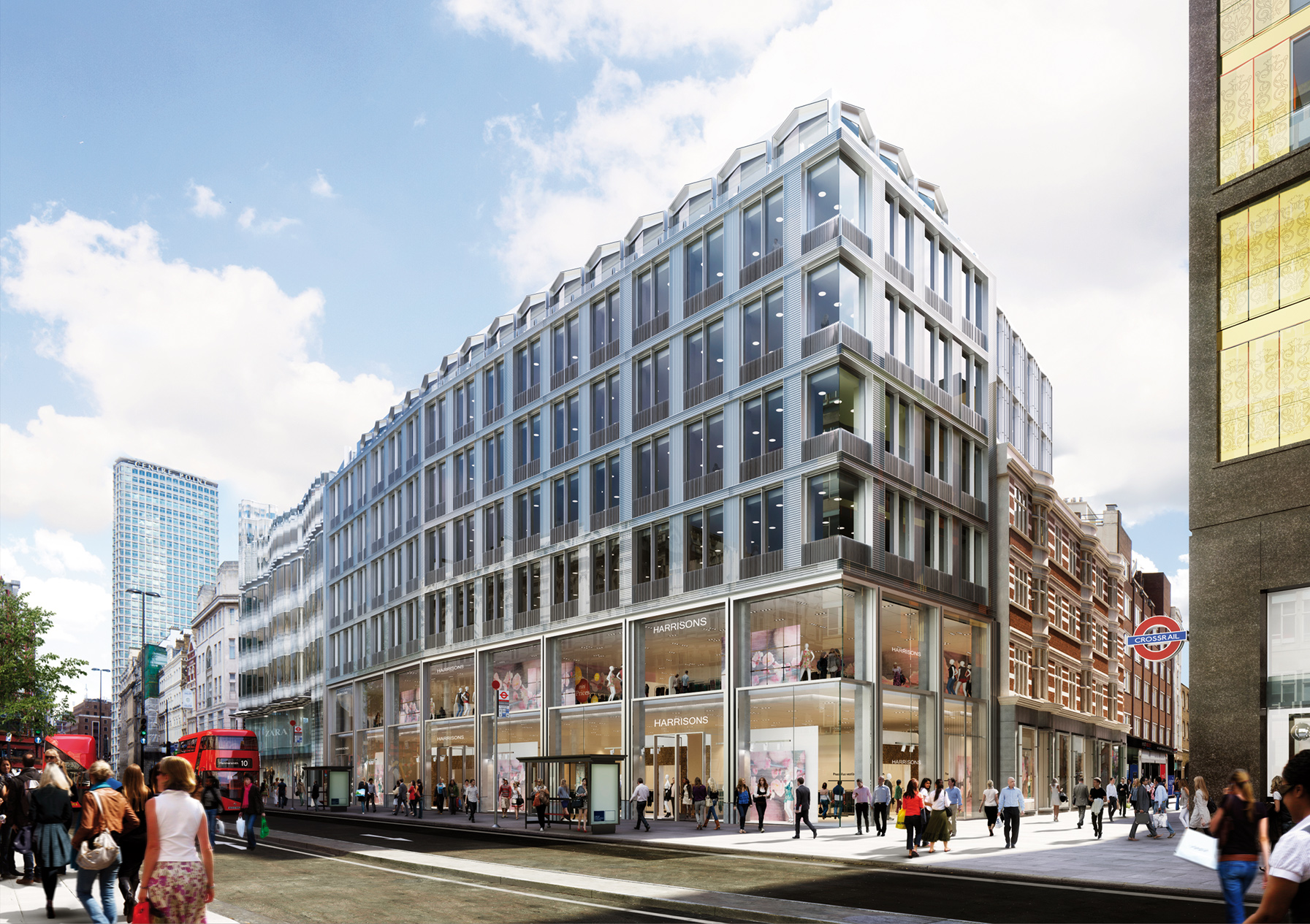 73-89 Oxford Street as depicted on the website of Lifschutz Davidson Sandilands at http://www.lds-uk.com/projects/73-89-oxford-street

There are two of these light-hearted blue-spandreled buildings on Great Titchfield Street just off Market Square, and they never fail to fill my heart with joy. As contextual modernism, I’m sure they’re unlikely to become listed buildings by themselves, but surely they should be protected as part of the conservation area. This image doesn’t do justice to the colour, which is decidedly cheerful. 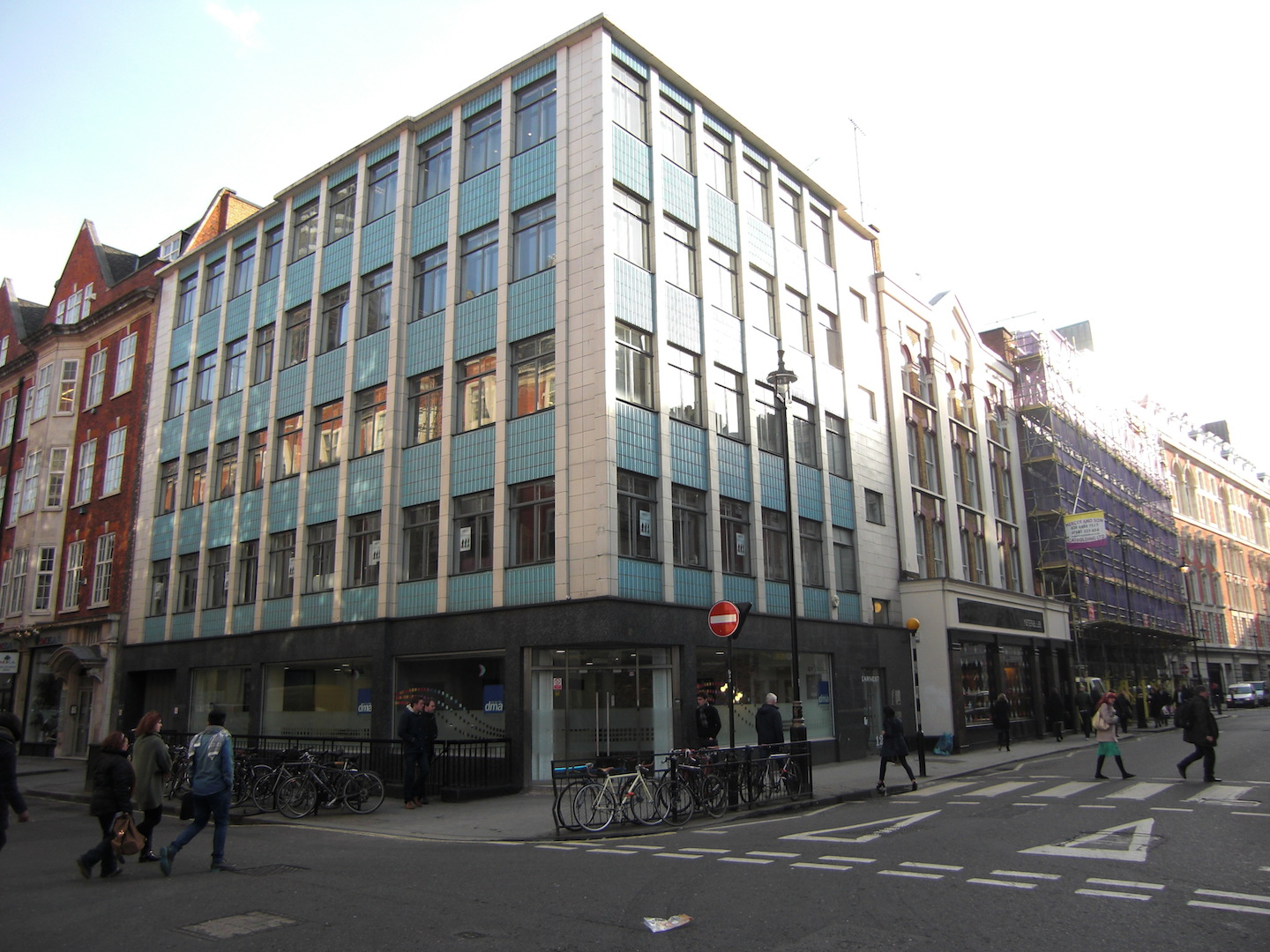 Buildings at the intersection of Great Titchfield Street and Margaret Street. The second is behind scaffolding at the moment (please let it not be demolition). Photo by author.

Further up Great Titchfield Street there stands this masterpiece of firmness and cosmopolitan grace. I was excited when the restaurant recently underwent a refurbishment, as I had visions of a Dudok-styled modernist café in the European idiom, but no, we got a pathetic bit of neo-Edwardianism with the same old subway tiles and exposed filament bulbs … and dead squirrels mounted by taxidermists as wall sconces. 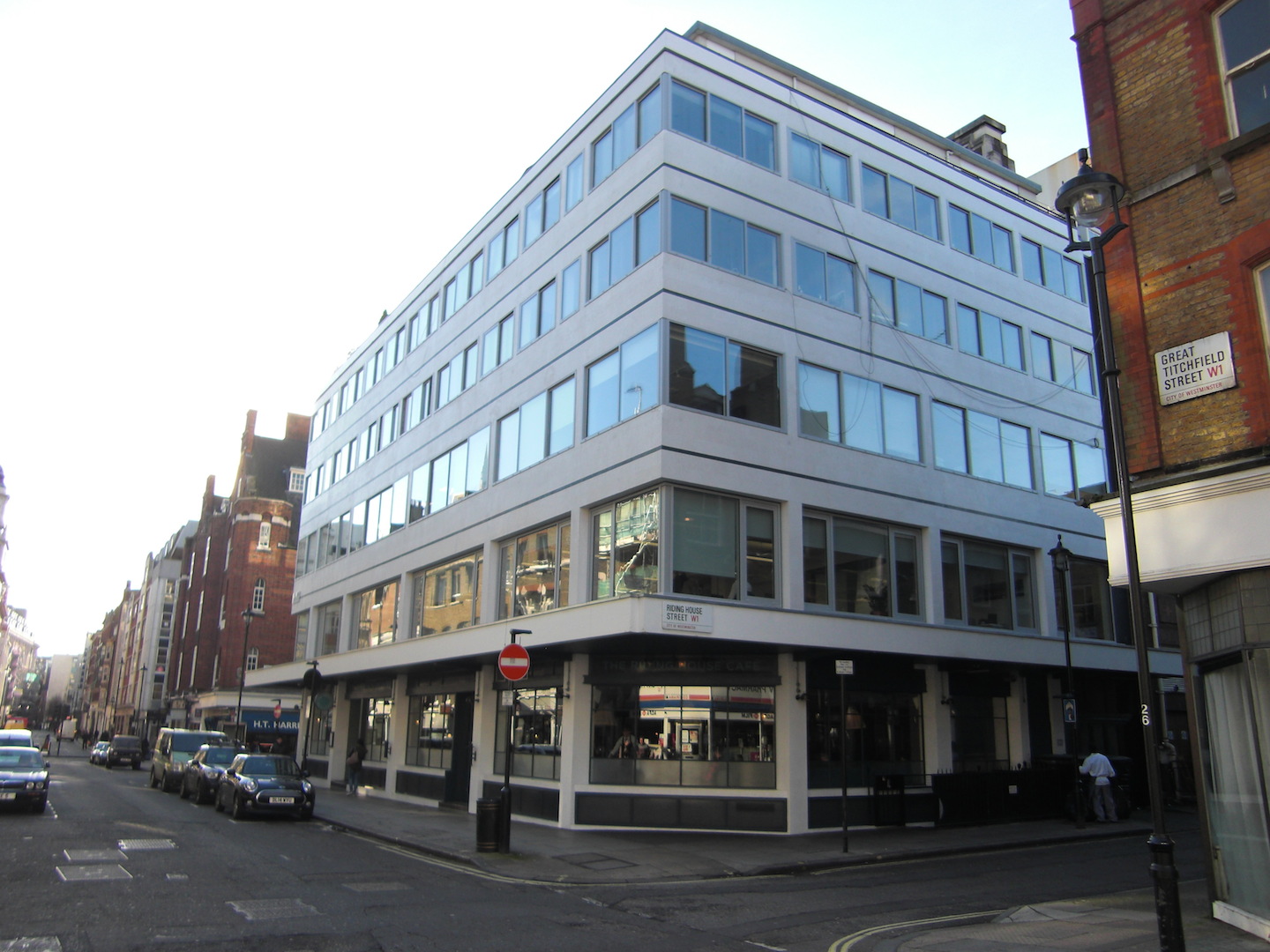 Building at Riding House Street and Great Titchfield Street. Clean, elegant, contextual and crying out for a proper European café to be housed within. Photo by author.

And then finally this beautiful building, on the northwest corner of Whitfield Street and Tottenham Street, which, to give credit where it is due, has been sensitively restored by the developer Derwent. 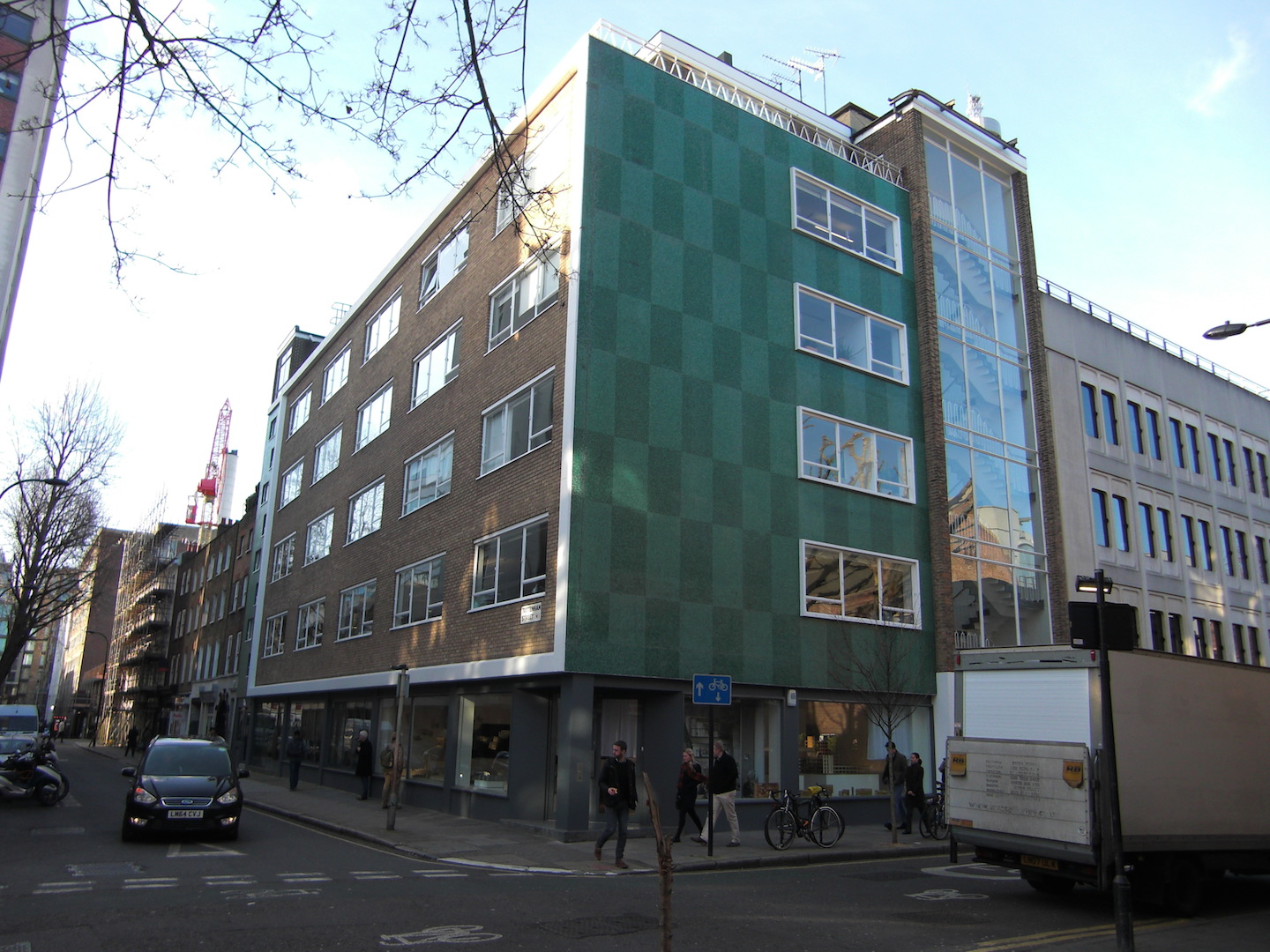 Building at Whitfield and Tottenham Streets in Fitzrovia. Such a fine staircase in a glazed shaft – sorry about the van in the foreground. Photo by author.

It is my fervent hope that eventually conservation areas might make better specific reference to good, contextual twentieth century architecture and landscape architecture, and preserve it as part of the ongoing work that is our beloved city.