A strange tug-of-war between a gentrifying private world and the need for a public life and public space are being played out in tiny micro-aggressions on doorsteps in Fitzrovia. At our recent meeting of residents at the late-Victorian mansion block where I live, the other tenants expressed worries about the large numbers of people, especially at lunch time, who perch on the front stairs and smoke or eat lunch. It’s a genuine problem, as tenants must work their way through the throng to enter their flats, rubbish is left behind – empty Pret a Manger bags and Red Bull tins – and cigarette smoke works its way through the gaps in our decaying sash windows to pollute our homes.

Around the corner on tiny Candover street, where arts-and-crafts buildings mount a small and loving charm offensive, a private physical therapy clinic has just sellotaped paper signs to its frosted glass windows to discourage workmen from the nearby (and apocalyptically awful) Fitzroy Place from sitting on the kerbstones during their lunch. 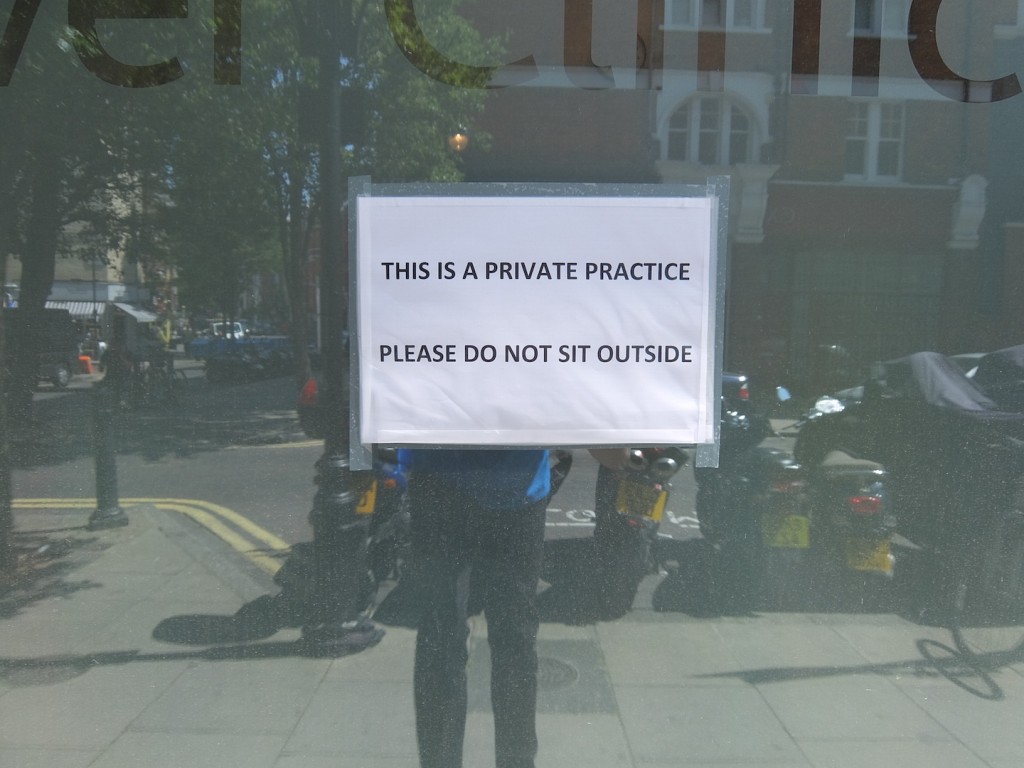 Sure, it’s a private clinic, but isn’t this public realm? 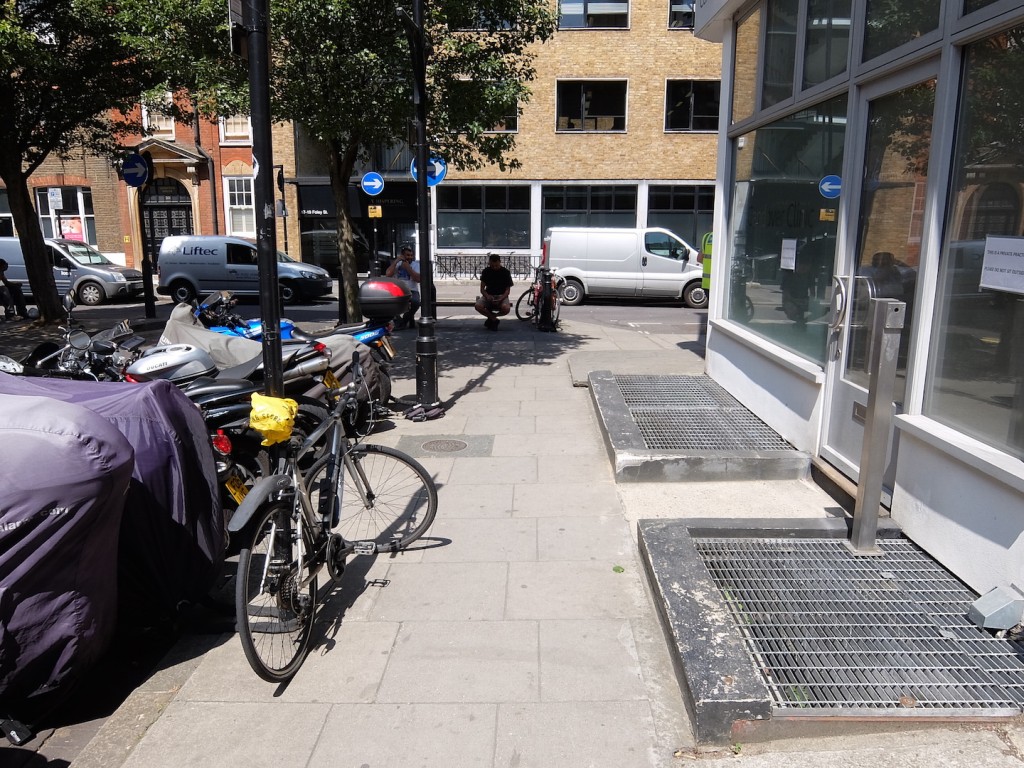 Look there – in the shade – a tiny, backless bench, an eloquent symbol of public wealth and civic plenty.

The frustrations are quite understandable in all cases. But perhaps it’s a sign of the times that we’ve forgotten how to think in larger terms about the issue. In the dog-eat-dog world the Tories inhabit, it’s might and money that will win in this situation, as we’re left to fight things out by ourselves. However there’s a friendlier, easier, and less vexing solution. We simply need more benches. Benches everywhere, with deep seats and generous backs, and bins nearby for lunch waste. What a sign of the wealth of our public realm that would be – and we could turn our street corners into pocket parks at the same time. We make London more beautiful and gracious by thinking publicly, not throwing up fortress walls. So I urge the Candover Clinic to take down their signs and call up the Council and ask for more benches everywhere. 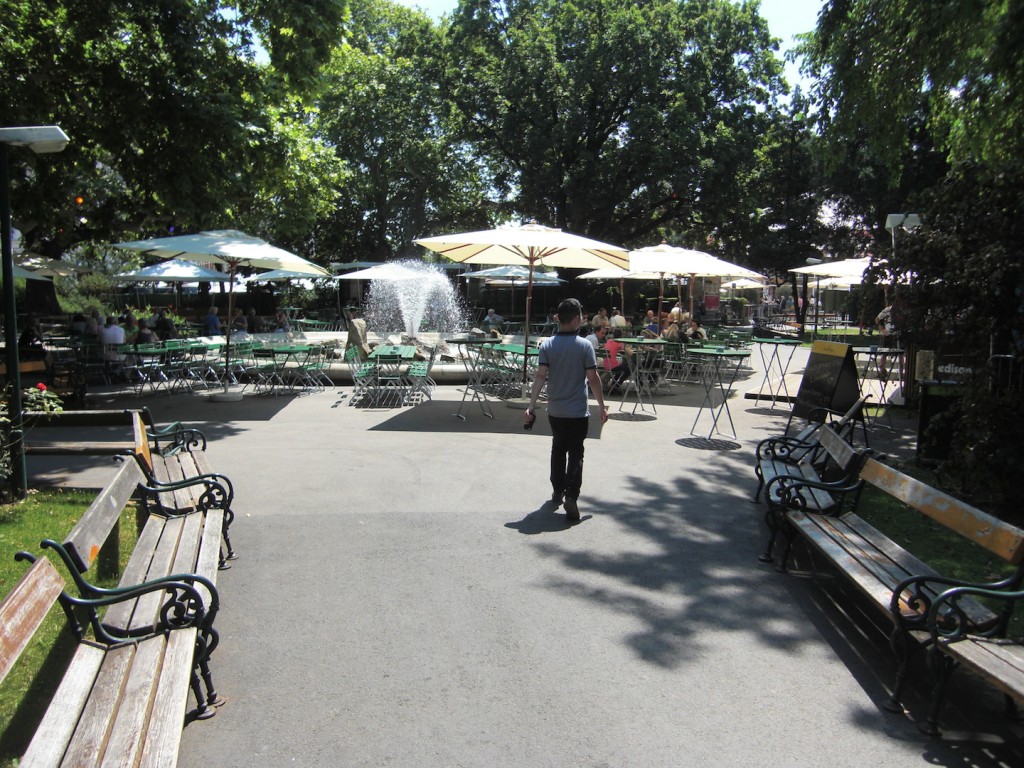 Here’s how they do it in Vienna! 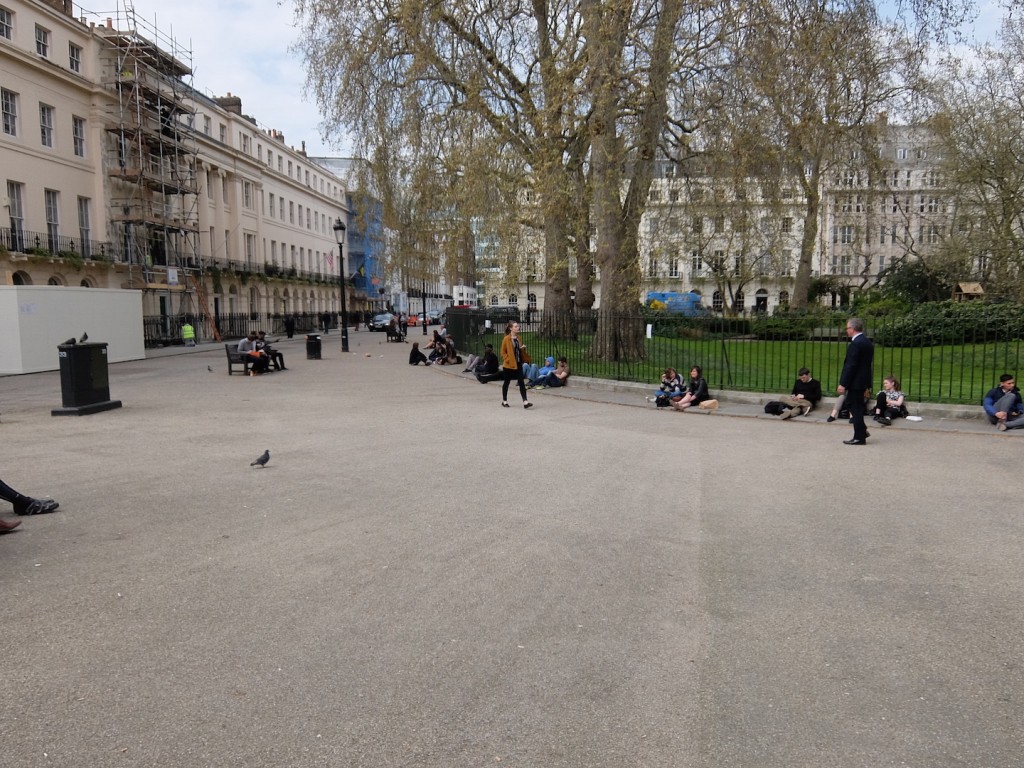 And here’s how we do it in London. Three benches and a fence to keep you out of the green. Welcome to London! Now go away. 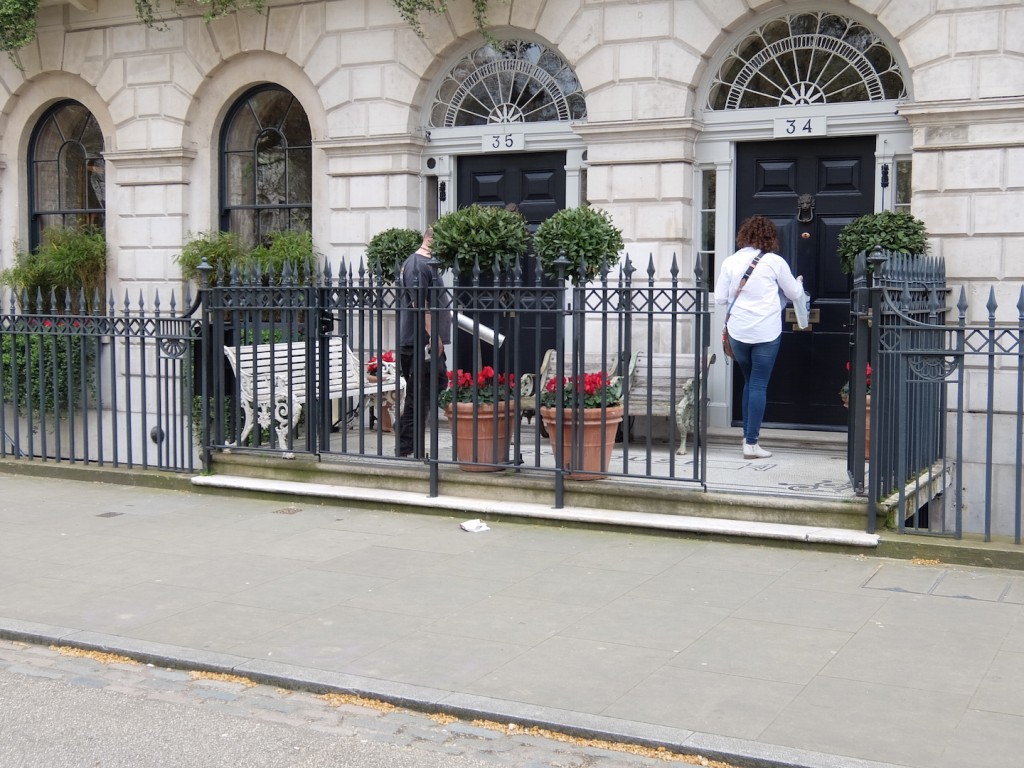 And here’s how to be the most hostile possible. This is Guy Ritchie’s house in Fitzroy Square. He’s gated off his front stoop (in a conservation area violation, I believe), just as a way to say ‘fuck you’ to his new neighbourhood. Hey, Guy! Fuck you too!

So I think it’s time to bring back a little civic-mindedness, because if we don’t we’ll all die of frustration, or we’ll be forced to take out our aggressions in ways that are distinctly uncivilised. Westminster Council – this is a plea for more benches in London! Maybe if you stopped replacing the beautiful, worn old British granite kerbstones with sparkly, brash Chinese granite we could afford a few more of them.