This article appeared in the July 2015 edition of Landscape Architecture Magazine (LAM), with the subheading “The Milan Expo raises unsought emotions about food, cities, the world.” The text and photos are both mine. 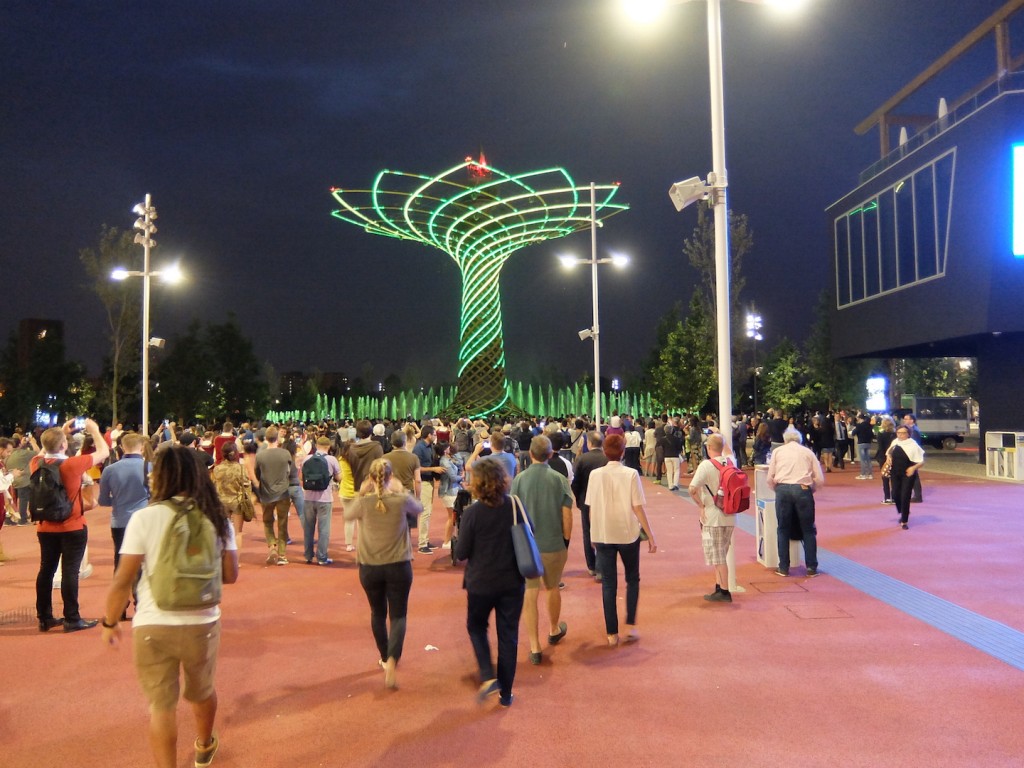 The ‘Tree of Life’ is a sound and light spectacle every evening that includes dancing waters and a techno soundtrack.

A city like Milan reflects the strivings of generations. It has a rich quality of everyday life that includes a sophisticated food culture, which, as in so many Italian cities, is both distinctly local and, because of its history of trade, cosmopolitan. The evolution of the city’s form has intertwined with the tastes and appetites of the Milanese. The convivial quality of many of its spaces comes from enclosures such as its ubiquitous courtyard gardens, its cool semiprivate zones where neighbors come into contact, or its sidewalk cafés. Milan was once Mediolanum (meaning “in the midst of the plain”), the capital of the Western Roman Empire. It was enclosed by walls, but open to its countryside in the Po River Valley, where alluvial soils raised abundant grain and grapes, and roads brought influence from all over Europe.

Milan’s economy has suffered, as has all of Italy’s, from the crash in 2008, and recession and unemployment are tenaciously rooted. While its economy continues to be underpinned by industry and agriculture, notably by small, family-owned farms, government policy has looked to urban and infrastructural development for solutions to the crisis. Italy’s new, post-Berlusconi government is trying to show evidence of its ability to deliver, and Milan, the financial center of Italy, has become a showcase of contemporary neoliberal development. In particular, two developments have shown great international visibility: the Milan Expo 2015 and the business district at Porta Nuova, best known for the Bosco Verticale (vertical forest), the heavily vegetated and much-published twin luxury apartment towers by the architect Stefano Boeri.

Boeri has courted controversy at both sites, attracting antigentrification protests both from the working-class neighborhood the towers protrude from, as well as accusations of deploying expensive greenwash that would never be possible in a lower-cost development. Much the same objections have been raised against the plans for this year’s expo in Milan, which he master planned with Jacques Herzog, William McDonough, and Ricky Burdett. “Feeding the Planet, Energy for Life” is the expo’s motto, meant, as it was, to embody a sustainable ethic, but it clashed with the presence of food giants such as McDonald’s and Coca-Cola among the nations represented. Lavish spending on the project further excited anger, as many people questioned the concentration of municipal spending on one site instead of many, and the inevitable siphoning away of funds that such concentration engenders. On May Day in Milan, cars blazed in the streets, windows were smashed, and ‘No Expo’ graffiti proliferated.

A vandalized shopfront in central Milan. 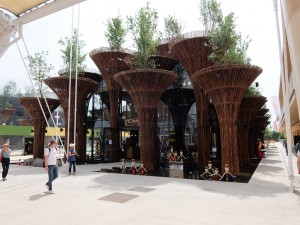 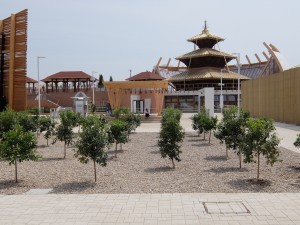 The Nepal Pavilion by the Implementing Expert Group was unfinished on the day of the second big earthquake in Nepal.

In this case, radical protesters have shown a conservative attitude toward public spending. Such stubbornness can also be found in Italy’s culinary and agricultural traditions. Like Milan’s urban fabric, these traditions reflect the strivings of generations: make-do-and-mend and waste-not-want-not methods ensure the sustainability of these traditional practices. Frugality is a fruitful practice, and thus the delights of the Italian table are legendary. Italy’s food culture provides the perfect platform to present good food practice to the world. This was the starting point for the master planning team, who wished to create a very different type of expo, mixing a necessary message in with all the usual flash of a multimedia, multination consumerist extravaganza.

I spoke in London with Burdett, who told me the original intention was that 50 percent of each expo plot should be given over to green open space, which meant that the whole would have been landscape-driven rather than focused on pavilions. Drawings from the 2009 proposal show delicate fabric awnings, fields of sunflowers, and canals. This much calm sincerity was, perhaps, doomed from the beginning, and all the partners on the master planning team except Boeri disowned the process and left the team when the requirement for green space was abandoned by the organizers.

The parts of the master plan that have survived are based in classical Roman city plans or plans of military camps. The site is bounded, in military or urban style, by fences, guards, gates, and canals, and it is organized on a grid with two primary axes: the cardo, or north–south axis, and the decumano, the east– west axis. Tentlike canopies, other survivors from the original master plan, float above.

The expo involved spending on major new highway, rail, and subway infrastructure and interchanges, enough for a permanent new city quarter, which now seems unlikely to be built in the near future. No developer has yet been found for the site, which is located on Milan’s western edge immediately adjacent to one of Europe’s largest convention centers, Fiera Milano. The area is typical urban fringe, a loose agglomeration of industrial uses, working-class neighborhoods, and strip development, all studded with islands of remnant agricultural land. Reports of scandals and boondoggles were rife, as all the usual problems with corruption, profiteering, and inflated land prices, along with a now-familiar story of worker exploitation and poor working conditions, unfolded. The growing cost of the event forced the organizers to search for more corporate sponsors, which included McDonald’s and Coca-Cola, as well as the confectioners Lindt and Ferrero Rocher. Their presence is “perverse and bizarre,” Burdett says. 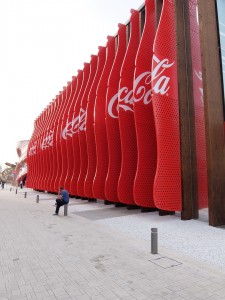 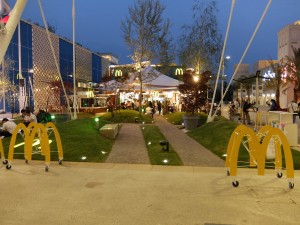 This familiar mix of corporate influence and official and private corruption angered not just those who demanded satisfaction in Milan’s streets, but also workers at the expo who have a keen sense of the politics (“In Italy, politics is everything,” says Burdett.). I toured the children’s area, which was filled with installations for interactive play designed to teach children about plants, food, and environmental responsibility. It was the end of the day, and there was a handful of children left. Many of the workers were gathered together and winding down. Among them was Stefano Bisi, who is scandalized by the presence of the food giants and convinced that “the only people who will gain are the big firms and those who poured the concrete.” Against a backdrop of giant multicolored fruit and vegetables, he warns me that we must “beware of the global cucumber.” Naturally, I’m mystified by this, and he explains by acting it out—he presses his back flush to a wall—“we have to guard our behinds from the global cucumber.”

There are some moments of real beauty, and pavilions that have kept to the original idea of 50 percent green space. These pavilions are without a doubt the most successful. Austria and the United Kingdom are the big showstoppers. Austria provides a steadily misted and cool, wooded undercroft. As the path climbs into the pavilion through trees, a neon sign which reads “breathe” comes to read “eat.” The UK Pavilion by the evocatively named Wolfgang Buttress and BDP is hardly a building at all, but rather a swarm of steel members hovering over a wildflower meadow humming with bees. Everywhere else, plants are growing on green walls at wild angles, as at Israel’s pavilion, or even upside down in a number of pavilions where any number of technocontraptions are employed in horticulture. It’s a relief to see plants growing happily, right-side up, in soil. 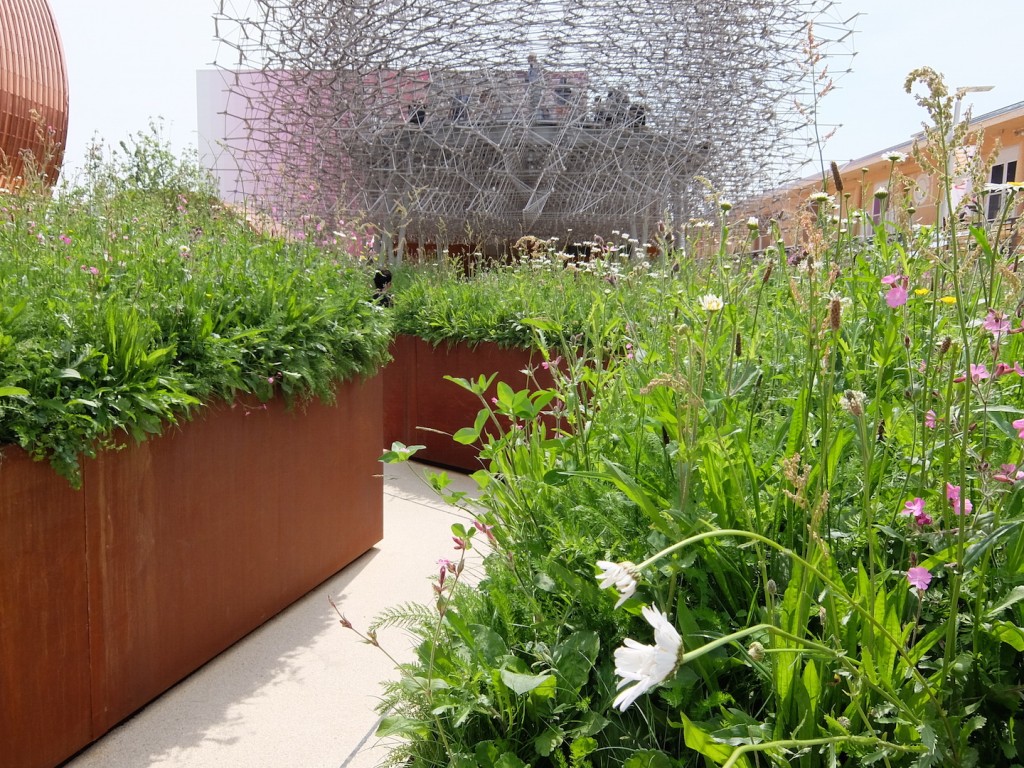 Wolfgang Buttress and BDP’s UK Pavilion works with the trendy metaphor of “the hive.” 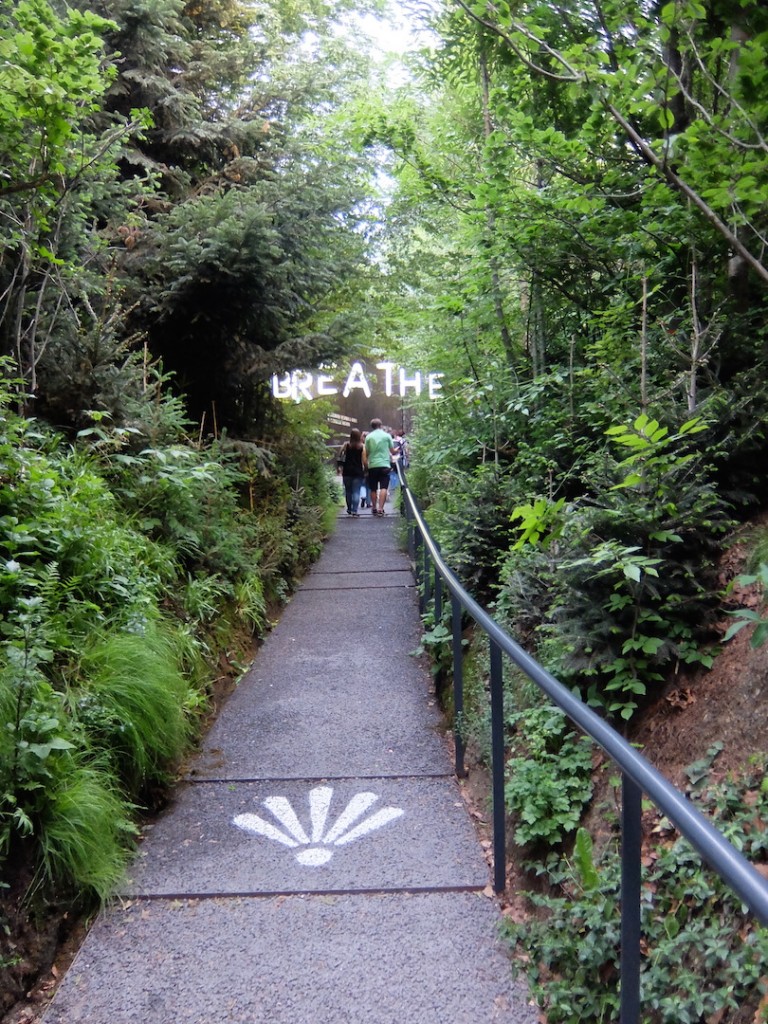 A path leads to the Austria Pavilion, which was designed by a team led by Klaus K. Loenhart, who is both an architect and a landscape architect.

The USA Pavilion is presented with our usual national swagger, second only in height to the Italian pavilion, and with great technopomp, a massive lighted sign at its entrance announces the dawning of the new age of “American Food 2.0.” This means that plants are grown both sideways and upside down, and that an enormous living wall encrusted with lettuces undulates rhythmically from stem to stern, apparently (avowedly) to evoke the vaunted national image of “amber waves of grain.” Not even your patriotism can overcome such leaden high concept and overzealous technophilia, though they’re certainly appropriate to the expo format. The Belgians, punching above their weight, also bring high-tech farming that looks like the inside of a laboratory, and the Ikea-like, serpentine circulation system through it spits us out into a wonderland of costly chocolates, beer, and pommes frites. 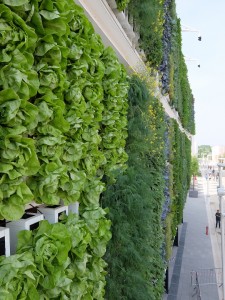 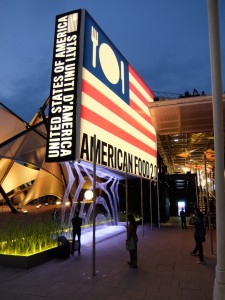 Some countries get the point of an expo but not of the foodie theme. Brazil has a bouncy climbing structure, while Russia’s mirrored, cantilevered erection is, says Burdett, “something an oligarch would build.” And, of course, a glib comparison to the global cucumber is apropos. The centerpiece of the whole exhibition, located at the south end of the cardo, next to the vast, white Italian pavilion, is the Tree of Life, designed by the event entrepreneur Marco Balich, and the focus for a fountain and multimedia light show every night of the expo. Like the “supertrees” at Singapore’s Gardens by the Bay, the form is the shape of a vortex like a tornado or a whirlpool, or perhaps the bell of a horn. (To describe the shape, an old friend suggests it might be called “vuvuzeliform,” in reference to vuvuzela, the stadium horn made famous by the 2010 soccer World Cup in South Africa.) Since the conflation of tree and vortex in Singapore, it’s become possible to see this “vuvuzeliform” as invoking the symbology of the tree of life, though this is an uncomfortable pairing, given that the tree of life is so often depicted with roots equivalent to its canopy. Rooted in the ground, reaching to the sky, a reflection of the cycle of life. The vortex/tree form appears everywhere at the Milan Expo, but it’s rootless.