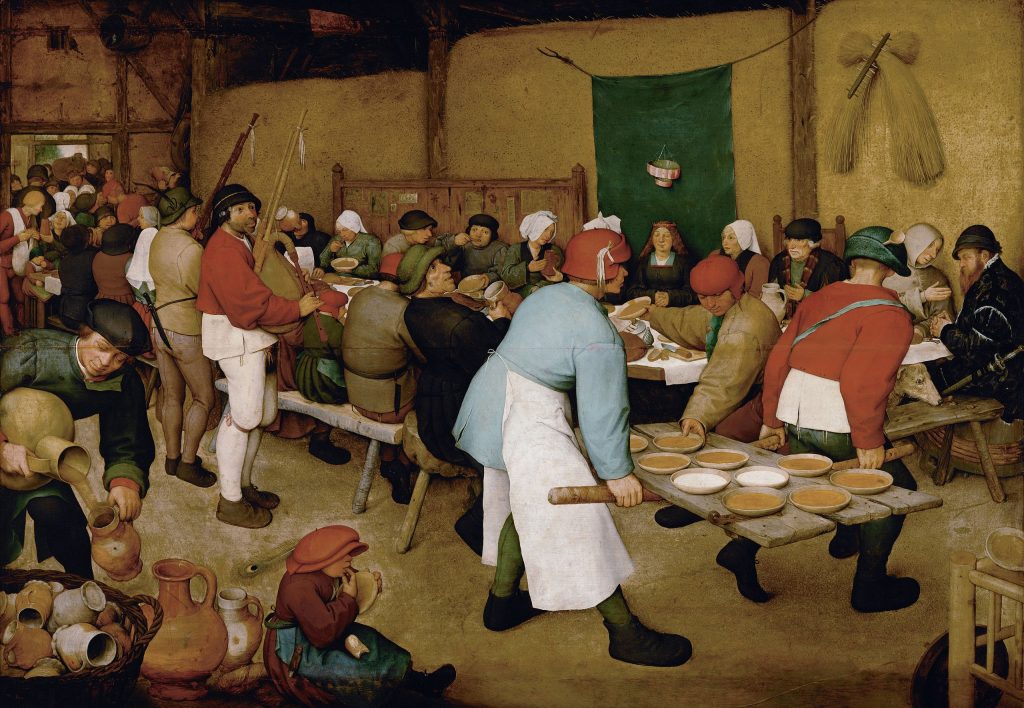 This piece first appeared on the ‘Feasts for the Future’ website of the University of Plymouth’s Imagining Alternatives here. It appeared alongside other short pieces from such luminaries as Ruth Levitas, Kim Stanley Robinson, and Susan Parham, and I’m grateful to be in their company. It seems appropriate to post it here just in time for the autumn harvest feast.

In my tweens, my family made a trip from Harwich to Copenhagen on a cruise ship. It is the one and only trip on a cruise ship I’ve ever taken. Even though it lasted only a couple of days, it was dull, especially for a youngster. Every meal was a buffet, and every meal was enormous, overflowing the table. 1980s Britain was not exactly cornucopian in either the quality or quantity of the meals served. Still, when every meal is a feast, the excitement begins to wear off.

One evening in the ship’s cinema we were treated to a screening of the film ‘Quest for Fire’, which I admit I only dimly remember, as though in flickering cave-light and also queasily rocked by the sea. The film is set 80,000 years in the past and was filmed in the Scottish Highlands. The plot, narrated by the actors in a speculative prehistoric language created by Anthony Burgess (who speculated on future tongues, of course, in A Clockwork Orange), is necessarily thin, revolving around the possession of a carefully kindled germ of fire. Around that glowing nucleus, in the 80,000 years that would follow, would form the campfire, the hearth, the kitchen, the dining room, the feast.

The cooking of food, whether or not it started exactly 80,000 years ago or not, may be one of the most important moments in human cultural evolution. First of all, cooking food makes more nutrients available, and second of all cooking and eating together is very much at the heart of human association. Biological evolution is a series of more- or less-happy accidents–mutations. More than mere happenstance, cultural evolution has shape and direction. It has memory and it is concerned with the future. It is human. To understand the evolution of the feast as a form of human association coupled with a utopian drive, a little reimagining of prehistory is necessary.

A fair amount of biological evolution can happen in a few thousand years, but only cultural evolution can explain the exponential advances of the human species. Primatologist Michael Tomasello speaks about the ‘ratchet effect’, in which innovations are held in place while new innovations are geared up and advanced upon them. That ratcheting, for humans, begins with the campfire, the spear, maybe the atlatl, and various tools for digging at the earth to forage. Many parts of the earth provide generously, copiously for such hunting and gathering lifestyles. There is little reason, rationally, to culturally evolve from this luxurious state into sedentist agriculture. Farming is hard, risky work with long hours, and it developed in many fruitful parts of the world where it might be seen to be unnecessary.

But just as the campfire projects the possibilities of the hearth and the kitchen, so the digging stick imagines the garden. And the kitchen and garden are projects that require organisation. In short, cooking, gardening, and tending animals are interesting. They give people something to talk about; a reason for language, even. The campfire, the kitchen, the garden, and the herd provide a focus for human energies and a reason for human association. The quest for fire leads to a quest for conviviality, and conviviality may well be humanity’s great project.

As flame-roasted meats developed into ‘lunch’ and ‘dinner’, so too did primal nature become formed into landscape, and even more interesting project in total than mere lunch or dinner. And the cycles of time; day and night, season, hunt and harvest–the genius temporum that accompanies landscape’s genius loci–become frames for imagining delicious pasts and tasty futures. ‘We are all utopians,’ wrote Henri Lefebvre, ‘so soon as we wish for something better,’ and the next feast necessarily has to be lovelier.

So, like Kim Stanley Robinson’s article here on this same site [actually, it is here], I come to the potluck, that great dining invention. A potluck is interesting. It’s a project. It requires organisation. It is a frame for conviviality. Then, perhaps most importantly, it is emblematic of the form of evolution which Peter Kropotkin calls ‘mutual aid’. Kropotkin clarified Darwin’s ‘survival of the fittest’, stressing that the fittest relationships within species and among species were those which ensured the greatest advantage. For humans, stories become part of the advantage; stories about pasts and futures; stories about utopia. Our future feasts (and when I say ‘our’, I mean ‘all humans’) are often utopias; dreams of convivial living in shared landscapes.

Utopia is a drive with the same sort of shape and direction as that of cultural evolution. When Lefebvre speaks about utopia, he speaks of it as part of a work–an oeuvre. Though much of human life in landscapes, whether rural or urban, is composed of drudgery, routine, duty, and hardship, what is created collectively is often beautiful, even transcendent. If human history is a dull fabric, it is woven through with sparkling utopian threads, and when seen in total the drapery of its folds is an astonishment. Those sparkling threads are the emergence of the festival in the everyday, the utopian feasts in which an abundance of food and a surplus of art, music, and dance make the everyday worthwhile.

If human feasting in late capitalism has itself become drudgery, like the overflowing tables on that Danish cruise ship of my childhood, then it’s likely that a return to understanding the nature and the place of the feast as a human project is important. To make the feast interesting and fulfilling, it is not enough for food to magically appear in folkloric abundance, as it does in the land of Cockaigne, but it must be part of a planned project that is undertaken collectively. A feast is meaningless, its utopian significance eviscerated, if it isn’t part of a project that links the landscape (of finding and foraging, whether roots or cheese and chocolate as well as growing) with the kitchen with the table; place-making with companionship (from com-panis, breaking bread together) and commensality (coming together at table). All of life must be lived with one eye on the potluck.