Kenneth R. Olwig’s essay ‘Are Islands Insular?’ appears in his insightful new book The Meanings of Landscape: Essays on Place, Space, Environment and Justice (Routledge, 2019). I reviewed this essay as part of a series of reviews of his book, which included reviews by Kent Mathewson, Tom Mels, Theano S. Terkenli, and Claudio Minca, and a response from Olwig. It is available here.

Early in 2006, two fishers, Sunder Raj and Pandit Tiwari lay in a drunken sleep after illegally fishing for mud crabs off the shore of North Sentinel Island in the Andamans. In the night they drifted onto the shore after their boat slipped its anchor. They were attacked and killed while they slept by the Sentinelese and buried in shallow graves on the beach. (Foster, 2006: n.p.) Some years later a similar fate awaited a missionary bent on fishing for souls rather than mud crabs. The isolation of the Sentinelese protects them from sexual exploitation, alcoholism, and Influenza, Measles and other diseases to which they have no resistance. The story of the Sentinelese seems to confirm every commonly held notion of insularity. It also, perhaps, helps to underscore the territoriality of the human species and of islands. Homi Bhabha tells us, ““Etymologically unsettled, ‘territory’ derives from both terra (earth) and terrēre (to frighten) whence territorium, ‘a place from which people are frightened off’” (1994: 99-100).

In ‘Are Islands Insular? A personal view’, in his new collection of essays The Meanings of Landscape, Kenneth R. Olwig (2019) challenges the contemporary conception of islands as insular. The essay purports to differ from his usual approach to the philological examination of landscape, rather he uses his “personal experience and background as an islander”—Staten Island, that is (ibid.: 89). Olwig, however, gets stuck right into literature and language in his preface, in which the meaning of choros is explored via Ptolemy, and a literary framework is established through mention of The Odyssey and Moby Dick. The essay does exercise a personal view, but through this seeks to define islands through the evaluation of the underlying actions and ideas that shape western understanding of them in much the same way etymology excavates words to find evidence of the actions and ideas contained within them. As such, then, this essay differs from Olwig’s usual philology primarily only through an increased intimacy of tone.

Olwig’s philology gains its power from its operation on three separate registers, each interdependent. “The philological approach taken here does not only have the traditional philological focus primarily on language and text, but also focuses on the semiotics of pictorial representation in relation to text,” he writes in his introduction (p. 3). His examination of the actions, processes, forces, and relations contained within words is not just augmented by a similar observation of imagery, but also acts on and interacts with the study of landscape forms, land uses, and place imaginaries. The stories written into places, told through wind and water, planting and harvesting, politics and justice, are explicated through a mode that broadens and deepens philology by an alignment with geography, topography, and chorography: a frame for thinking that, although Olwig has not himself used the term, I like to call toposophy. Olwig uses the term environmental geohumanities, which is useful, if clunky, but lacks the sense of a set of tools and ethics for structuring thinking held in the ideas of philology and toposophy.

If one thinks through word, image, and landscape form, it is clear that islands are insular, a point Olwig seeks not to refute, but to augment. Islands are isolated. Both of these terms arise from the Latin insula. The situation of the Sentinelese people exemplifies this. There are other ways of being islandic, though, that are radically different and that enrich the ways in which islands could be conceived. It is Olwig’s gift to the reader in all he writes, to provide not either–or, but both–and. 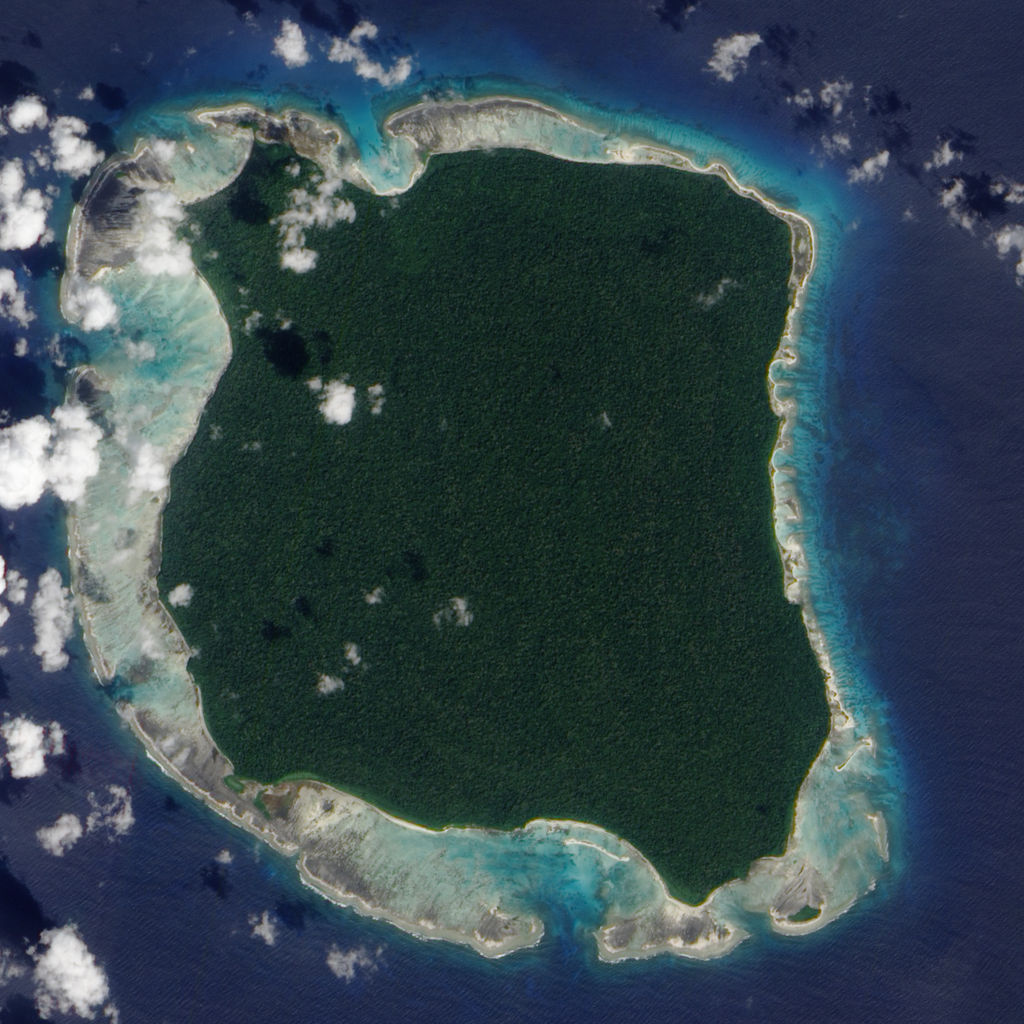 Olwig’s work has been a profound influence in my own thinking, writing, and teaching. His habits of relentless investigation and delightfully, imaginative word and image play (including elaborate puns) showed me I could nurture and gain from such practices already present within my work. Here is an example pertinent to the task at hand: When I teach about the British Isles in ancient times, I present my students with a north-up map view of Scotland and the tip of Norway, centered on the Orkney archipelago. Then, speaking of the difficulty of traveling over land in the interior and the naturalness of seafaring, I invert the map, which completes the process of forcing the students to see the island not as remote, but central from the perspective of a voyager on the North Sea, from the perspective Olwig calls “islecentrality.” “From the sea,” Olwig writes, “the world is made up of islands and peninsulas, and that which is unreachable by water is isolated terra incognita and the true home of insularity. The word for insularity should really be in-continentality” (p. 94). Olwig’s inversion (and his pun) here also helps to show the world in a profoundly different way. This does not, of course, negate the fact that, in the contemporary world such a place as Orkney can legitimately be seen as remote, insular, and isolated, but that it is also simultaneously and fruitfully near, embroiled, and central. Such manifold and often contradictory meanings are precisely and always what landscapes hold and display, a fact that helps to explain the plural meanings employed in the title of this book. Without various and contradictory meanings, word play would not be possible, and so the pun, much maligned as a witticism, can here be elevated to an emblem of an approach to thinking about landscape meanings philologically, toposophically, and playfully. 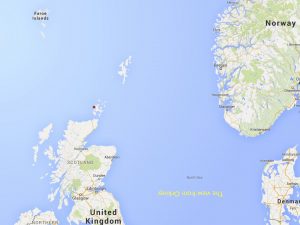 Orkney inverted, showing how different the view from the water and the island is from the mainland. 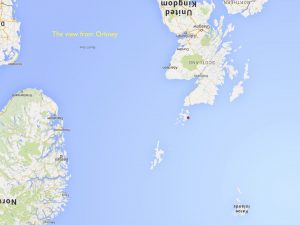 Over the past century or so, philology as a practice, as a mode, has fallen into obscurity. Olwig’s body of work, however, along with the work of several other writers who have been close to Olwig both intellectually and through friendship, including Ingold, Lowenthal, and Tuan, have worked, each in their own way, to reclaim the wide-reaching philological base of the (geo)humanities. Olwig’s work helps us to see philology not as a remote, depopulated island, but as a realm that, once one has escaped from the in-continentality of disciplinary silos, can be discovered as a field of intellectual endeavor with its own islecentrality, linking together all the islands and peninsulas into newly intelligible coastlines in an ocean of playful and profound knowledge. 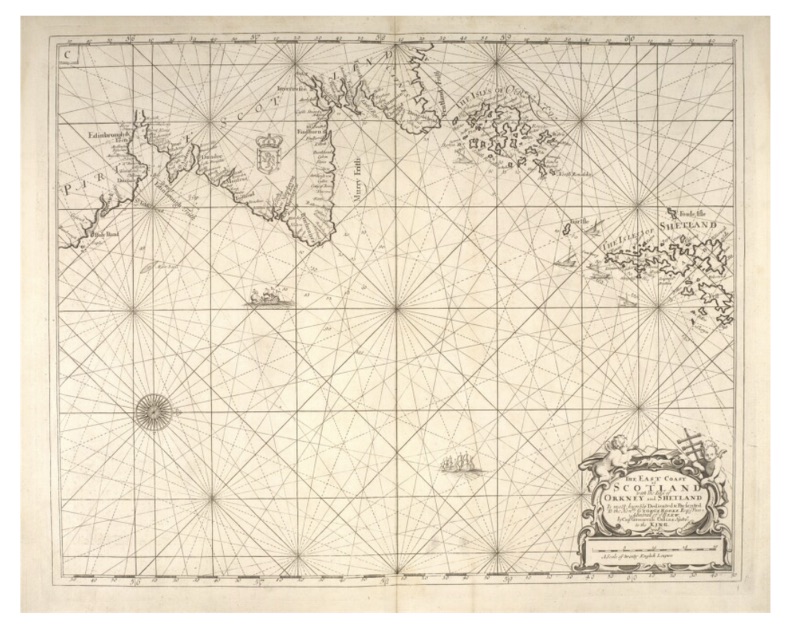 Portolan chart: “The East Coast of Scotland with the Isles of Orkney and Shetland.”
1693? Collins Greenville (National Library of Scotland. https://maps.nls.uk/coasts/chart/178)