Today is the anniversary of the Mass Trespass of Kinder Scout on 24 April 1932. To celebrate the continuing legacy of this momentous event, I reproduce here an excerpt from my book chapter “Democracy and Trespass: Political Dimensions of Landscape Access”, published in Defining Landscape Democracy: A Path to Spatial Justice, edited by Shelley Egoz, Karsten Jørgensen, and Deni Ruggeri, published by Edward Elgar in 2018. 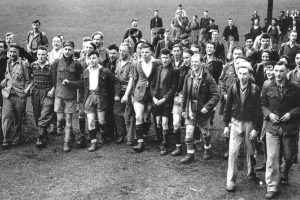 The express link between history and geography is made clear when we say that history ‘takes place’, that movements of people and great conflicts often occur due to disputes over land and resources and conditions of scarcity. The link between history and geography is as reciprocal and relational as the link between humans and their environment is in the concept of landscape. Places are produced and framed by the historical events that occur within them. These determine the scale and tenor of events in such spaces into the future. This is not necessarily always an ‘organic’ progression, however, as the making of landscape has increasingly, in modernity, been tied to the wielding of power, as with the Enclosures in England (Thompson 2013; Williams 1973).

It is easy to naïvely assume that before the Enclosures and the planting of miles of hedgerows that demarcated its definitions that the British landscape was a largely boundless common land defined instead around centres of feudal power: the lord, the castle, the monarch. Firm definitions of territorial boundaries in Britain, however, predate the Enclosures quite considerably. The ancient pagan practice of ‘beating the bounds’, which continues to this day in many places in England and Wales, involves elders of a community accompanying youths on a circuit of the boundaries of the parish, and beating the children with sticks at landmarks along the way (Olwig 2002). Nowadays the beating is light and ceremonial, but the seriousness of understanding precisely where borders lay in case of dispute would have justified painful beatings historically. Where surveying is now the final arbiter of boundary disputes, this more abstract practice was preceded by one in which the body and its situation – its siting, its emplacement in context – were key to maintaining order. The bodily memory and experience of bounding are explicit in ways that reinforce the body’s profound part of human cognition. The senses, in this case excited to the point of pain, are fundamental to human meaning, identity and place.

This very visceral ‘knowing one’s place’ is both literal and figurative, and reflecting on this gives one a sense of what an outrage it was to the peasantry – physical, moral and spatial – that boundaries could be blithely rearranged by the wealthy, ‘landed’ classes in the Enclosures.

The peasantry, forced, often violently, off the land, became the urban proletariat in modernity, and now the underclass is defined by the desperately marginalised and often de-skilled poor or the precariat. The precariat is composed of those who are living at or below the subsistence level, lack job security, and are often in debt. For the peasantry, the proletariat and the precariat, the forces of oppression are tied directly to the practices of capitalism, and the project of the Enclosures must be seen to be one that is ongoing and unfinished, perhaps (though hopefully not) interminable.

Cultural historians Peter Linebaugh and Marcus Rediker identify the oppression that has accompanied capitalist accumulation throughout modernity as ‘the three disabilities of terror’, which are at root three different problems with embodiment, emplacement and identity. These are: (i) the inability to name the oppressor (evident in forms of resistance and misplacement of anger in various forms of racism and xenophobia, for example); (ii) the desire for death (this is quite specifically engendered from the hopelessness of violence and enables people to give up their lives or those of others such as in gang warfare); and (iii) to become deracinated – specifically to be removed from place, culture and identity (Linebaugh and Rediker 2000, pp. 53–54, 60). What is disabled by terror, wherever it is deployed – which is virtually wherever it is conceivable – is the practice of alternative ways of living, often collective, and ‘popular attachments to liberty and the fullness of sensuality’ (ibid., p. 14) Curiously, the terror finds itself directed back upwards at the oppressor, as the fears of rebellion, crime or other transgressions born of the isolation germane to wealth and power is also a form of the terror of deracination.

To know one’s place in a democracy is to know that one’s place is often on the other side of someone else’s fence. Trespass is necessary to the defence of democracy, as is the idea of utopia: the dream of a better world beyond those boundaries. Democracy is a constant pressure against the solidification of forms of authoritarian power, a solidification that is more often than not spatial and enclosing in its expression. Both hope and transgression – ‘a form of politics’ – are the primary forms this resistance takes (Cresswell 1996, p. 9). In politics, hope for the masses is tied to place and setting (and Michael Walzer (1992, p. 98) describes civil society as a ‘setting of settings’). Thus it is situated; topos drives change, and civil society functions in places as social and historical agent. It takes place. Peter Hallward writes, ‘Democracy means rule of the people, the assertion of the people’s will. Democracy applies in so far as the collective will of the people over-powers those who exploit, oppress, or deceive them. Abstracted from such relations of power and over-power, democracy is an empty word’. It is also an empty word when democracy is abstracted from the places people inhabit, and in which power and over-power are physically expressed.

Trespass, as it so often has been historically, is an embodied, emplaced rejection of global capital and its processes of abstraction and extraction – and disembodied dis-emplaced corporations and people – from the land-grabbing gentry of the early days of the Enclosures to the tax-dodging corporations who hide their money and existences in non-places, to the ‘people’ who own urban luxury flats or villas but who are never home. How can any of this be democratic?

Isolation (and splendid isolation) and its accompanying tendencies of bounding and defence breed fear, particularly the fear of trespass. On the other hand, isolation and fortification necessitate trespass in a democracy. Thus the fear of trespass is fully justified, as is the necessity of trespass. Democracy is the project of resisting certain forms of conservatism – in particular the form that seeks to preserve or to entrench structures of power, class (which nowadays may be read as ‘lifestyle’) and wealth, and their expression in landscapes.

In 1932, young members of the urban proletariat of Manchester and Sheffield, frustrated by a lack of access to the beautiful Peak District landscape around the summit of Kinder Scout (a point roughly equidistant from each city), demonstrated the power of trespass as part of the Right to Roam movement. Benny Rothman, one of the leaders of the group that undertook to trespass on the private land, guarded by keepers and used by a wealthy minority to shoot grouse, says of the group:

We were very young, almost entirely under 21. The established rambling clubs were of a far older age group, and had spent a lifetime in the rambling movement. We were impatient at the seemingly futile efforts so far made to achieve access to mountains. Conditions in towns were becoming more intolerable and unemployment, which stood at about four million, greatly added to our frustration. (Rothman 2012, p. 21)

The Manchester Ramblers’ Federation, the more ‘established rambling club’, was hostile to the idea, afraid that it would antagonise the landowners and set the movement back (ibid., p. 20). Kinder Scout, once common land, but enclosed in 1830, was a highly visible but emphatically denied attractor to those ramblers seeking to escape the smoke and crowding of the industrial cities. The ramblers must have felt the constriction of the industrial city in a very real, bodily way. The 24th April 1932 was a clear, bright day, and the young crowd of working-class men and women took to the hills, ready to defy the keepers, who were armed with stout sticks. Rothman and his friend Woolfie Winnick led the group mounting Kinder Scout from the Manchester side, while another group made the ascent from Sheffield. Rothman and Winnick evaded a heavy police presence stationed to prevent them taking to the paths, and addressed the crowd at Bowden Bridge quarry. During the ascent the group grappled with the gamekeepers, but overcame them and walked much of the way to the peak. The ramblers enacted the freedom of access and the freedom to roam and thus won the right of both at Kinder Scout.

The Kinder Scout Mass Trespass was as much addressing problems of urban conditions and proletariat lives as it was addressing conditions in the countryside. The ongoing Occupy movement also embodies manifold meanings, reaching from physical urban places to structural conditions in geopolitics. In particular its actions at Zuccotti Park in New York from 17 September until 15 November 2011, at St Paul’s in London from 15 October 2011 until 14 June 2012, and at Gezi Park in Istanbul from 28 May until 15 June 2013 expressed the right for resistant bodies to occupy public places at the same time as they expressed a desire for a new global political order that excluded the practices of neo-liberal capitalism. Crucial to Occupy is the performance of democracy (Chomsky 2012). Horizontally and non-hierarchically organised, Occupy insists not on making specific demands, but rather demonstrating ‘its refusal to recognize the legitimacy of the existing political institutions’, and ‘to challenge the fundamental premises of our economic system’ (Graeber 2013, p. 99). Its goal is to show by example, by acting it out, that a better alternative to the current system of government manipulated by corporations, at best ignoring and at worst victimising the poor and serving the wealthy, is possible. David Graeber, one of the key figures of Occupy, calls this ‘prefigurative politics’: it is a politics of futurity in a utopian mode, and all the stronger for it. ‘Direct action’, he says, ‘is, ultimately, the defiant insistence on acting as if one is already free’ (ibid., p. 233).

What both the Kinder Scout Mass Trespass and the actions of the Occupy movement demonstrate is an embodied and emplaced resistance to force, violence and enclosures through the assertion of equality – in place, through the use of the body, and through the projection of political imaginaries. This assertion is concrete in a way that that which it resists is not. State and corporate power are increasingly abstract – abstracted away from sources of real value to simple arithmetic measures as well as the physical abstraction of people and human processes from land. Urbanisation has effectively emptied the countryside of people in many places, making the rural landscape little more than a picturesque abstraction for a large segment of the population in the West. Of Henri Lefebvre’s famous statement about the ‘right to the city’, David Harvey (2013, pp. 3–4) writes:

[T]he question of what kind of city we want cannot be divorced from the kind of people we want to be, what kinds of social relations we seek, what relations to nature we cherish, what style of life we desire, what aesthetic values we hold. The right to the city is, therefore, far more than a right of individual or group access to the resources that the city embodies: it is a right to change and reinvent the city more after our hearts’ desire. It is moreover, a collective rather than an individual right, since reinventing the city inevitably depends upon the exercise of a collective power over the processes of urbanization. The freedom to make and remake ourselves and our cities is, I want to argue, one of the most precious yet most neglected of our human rights.