A friend told me a story recently about an urban designer who derided a landscape architect with whom he was working for not understanding urban design because his insistence on planting shrubs was in clear violation of the principles of ‘designing out crime.’ Designing out crime is a tick-box approach to urban design that will always shun the shrub as it is seen to provide a refuge for lurking criminals. Please ignore the fact that the lurking criminal is probably just a homeless person seeking a place to sleep and focus instead on the urban designer’s prejudices. His problem is that he views urban design not as a conversation between professionals and communities with different capabilities and perspectives, but as a work in which prescriptive principles, in the hands of a master designer (him), can, with great certainty, assure the success of a particular piece of design.

Two master designers are at present seeking to commit an expensive act of vandalism on London’s River Thames, and have just been given the green light by the two London Boroughs upon whose banks the bridge will rest.  Thomas Heatherwick designs beautiful toys and Dan Pearson designs beautiful plantings, but together they have wrought a beautiful disaster. Its construction is based upon the erroneous prescriptive principle that an ‘iconic’ structure is always a benefit – as if headlines alone will make a great city or a great nation. It only remains for London’s Narcissist-in-Chief Boris Johnson to wave it through – and self-aggrandizement through the construction of a useless bit of iconic bling is something he craves. Just look at that awful loopy red thing on the Olympic site in Stratford, for example.

The Garden Bridge (eventually to become the BP Garden Bridge or the Virgin Garden Bridge, certainly) will be a fitting icon. It will stand as a symbol of the corruption, greed, and narrow-mindedness of contemporary political, corporate, and urban (just try to separate them) processes. Our government’s greater act of vandalism, that of eviscerating higher education and the rest of the public sector in Britain, will need memorializing. What more fitting monument than a symbol of a lack of holistic and critical thinking in London and lavish spending on a project to benefit a central few rather than the many neighbourhoods (and many small landscape architectural practices) that could benefit so much from a fraction of that cash. We’ll have higher education only for an elite, we’ll have a bankrupt NHS, we’ll have rampant homelessness, but hey, we’ll have a garden bridge. 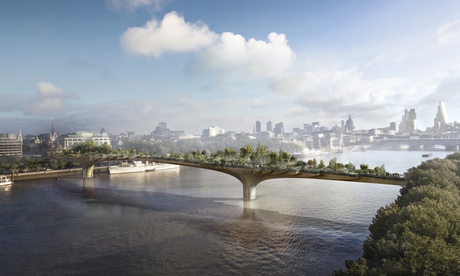 When a landscape architect plants a shrub, it may indeed be in the knowledge that a homeless person might find refuge there. It may also be to slow stormwater runoff in order to prevent flooding downstream. It might also be for beauty and pleasure. This is the real meaning of green infrastructure. The garden bridge is vain greenwash. We need generosity and openness in our cities. We need to have urban designers and politicians who are engaged in meaningful conversations with each other and with places, not peddlers of ego and of false certainties. The garden bridge is a fine symbol of how sick and selfish we’ve become. London doesn’t need a garden bridge.